Berlin counts the cost of the Nazis’ cultural crackdown 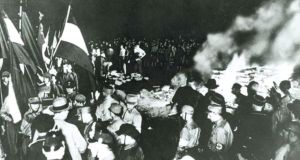 Students throw journals and books onto bonfires in Bebelplatz in 1933 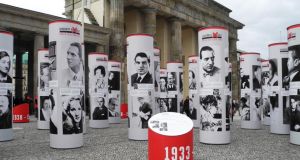 The pillars in Berlin that bear witness to lives not lived, words not written

Every city has its ghosts, but in Berlin this week a portal to the past was wide open, and spectres, benign and malevolent, wandered the cityscape.

Exactly eight decades ago the Nazis, having secured their political grip on the country, began a vicious cultural crackdown, purging the country of everything they deemed decadent and “un-German”.

Books of “un-German” authors were burned on public bonfires around the country Hitler’s henchmen worked their way through long hit lists of Nazi opponents, driving hundreds of thousands into panicked exile or early graves.

Until now, considering the lasting effects of this cultural cull took a back seat to dealing with the more visible, pressing consequences of Nazi violence: the second World War, the Holocaust and the rebuilding of devastated cities and a divided country.

This year Berlin is drawing breath and considering what was lost in 1933 by running a year-long programme of more than 500 exhibitions, performances and exhibitions under the banner “Diversity Destroyed”.

Scattered around the city are more than 200 temporary pillars advertising, instead of films or concerts, the German genius destroyed in the 12 years of the Third Reich.

Staring out are familiar emigre faces – Marlene Dietrich, Albert Einstein, Billy Wilder – and less-familiar figures who weren’t as lucky: Regina Jonas, Germany’s first woman rabbi, murdered in Theresienstadt; the poet Gertrud Kolmar, murdered in Auschwitz; the actor and communist Hans Otto, tortured by the Nazis and tossed out of a third-floor window to his death.

Every pillar bears silent witness to lives not lived, words not written, uncollected Nobel Prizes. It is left to the passers-by to consider the Germany that never was.

“The diversity of a cosmopolitan Berlin was destroyed by the Nazis in the shortest of time with profound consequences,” said Berlin’s mayor, Klaus Wowereit, launching the year of events.

Germany’s interwar Weimar Republic was an ailing democracy, but few could have predicted it would be dismantled with dizzying efficiency in just two months. On January 30th, 1933, Hitler’s National Socialist Party entered a coalition government and by March 24th a two-thirds Reichstag majority, amid Nazi threats and intimidation, backed the Enabling Act (Ermächtigungsgesetz). Presented as a time-limited, crisis-era measure against a supposed communist threat, it allowed the Nazi-controlled executive to implement laws, bypassing the disempowered legislative.

Considering the scale of terror the dictatorship unleashed, it is disconcerting how few concrete traces survive in Berlin. That’s what makes the red-brick complex near the Südkreuz train station so valuable.

Originally a Prussian railway barracks, it was run from March to December 1933 as an early concentration camp by the paramilitary SA, or Sturmabteilung (Storm Detachment). This brown-clad heavy squad was deployed to guard Nazi events and intimidate political rivals and Jewish citizens. From 1933 the SA field police based in Berlin were empowered to arrest anyone, anywhere, at any time, for any reason.

In just nine months more than 1,000 people were dragged down the stone steps to uncertain fates. Forgotten for decades, and just reopened to visitors, the clammy cellar air and dirty walls are still marked by eight-decade-old desperation. On one wall an unnamed prisoner marked 20 lonely days of detention without charge. On another, a pencil sketch, presumably by a guard, shows an eagle holding a swastika-emblazoned Earth.

This small, shocking memorial fills a crucial gap in the chain of knowledge about how Nazism moved from fringe extremism to state ideology and a terror regime. Long before the establishment of the gas chambers in isolated Auschwitz, a supposedly civilised society was dismantled stone by stone in the heart of the German capital – beneath the eyes of its citizens.

Once the SA had fulfilled its role in eliminating or scattering the enemies of the Nazi regime it, too, was effectively liquidated in 1934.

“The early Nazi period has always been neglected by historians who dedicated themselves to the war and the Holocaust,” says Christoph Kühn of Schöneberg Museum, which runs tours of the SA prison. “We try to explain to the school groups we have here how easily democracy was lost in 1933 because of places like this.”

So effective was the 1933 destruction of Berlin’s diversity that, in most cases, even the memory was erased. Few are aware, for instance, of Beethoven Strasse, which once ran behind today’s chancellery, or of a grand villa here that housed the “Institute of Sexual Science”. It was founded in 1919 by Magnus Hirschfeld, a Jewish physician dubbed the Einstein of sex, who dismissed moral notions of “normal” and “abnormal” and instead saw sexuality as a dynamic, sliding scale – revolutionary stuff in the 1920s.

His institute was an early Nazi target. At 9am on May 6th, 1933, a truck with 100 students and a brass band pulled up outside the institute and forced their way in. They confiscated “un-German” books and other material. Four days later on the Opernplatz (now Bebelplatz) much – but not all – of it was burned.

The pragmatic Hirschfeld bought back many of the books and manuscripts. “In public the Nazis deplored the material as immoral but had held on to much of it in the hope of selling it,” says Ralf Dose, director of the Magnus Hirschfeld society. “But the lot vanished after Hirschfeld’s death in France. We’re still hunting for the material.”

Today the society is collaborating with a new foundation and Berlin’s Humboldt University to re-establish Berlin as world centre of sexuality studies, as it was until its destruction on a sunny May morning eight decades ago.

Diversity Destroyed exhibitions run at the German Historical Museum and the Topography of Terror exhibition hall until the end of the year. dhm.de. SA prison memorial: gedenkort-papestrasse.de


Fighting Words: Public book burning
Last night Germany remembered the evening 80 years ago when nationalist student organisations purged libraries, in more than 20 cities, of works deemed “un-German” by the Nazis. In Berlin alone more than 20,000 volumes were incinerated on today’s Bebelplatz (then Opernplatz), opposite the Humboldt University.

More than 130 authors were blacklisted, many from the core of the German canon: Thomas and Heinrich Mann, Erich Maria Remarque, Arthur Schnitzler and Stefan Zweig.

At midnight, Nazi propaganda minister Joseph Goebbels showed up to appraise the students’ work, bellowing: “The era of pointed Jewish intellectualism is over.”

Silent witnesses that evening included Christopher Isherwood and Erich Kästner. The latter watched everything he had written – except his popular children’s book Emil and the Detectives – go up in flames.

The events seemed to have been foretold by the poet Heinrich Heine, who wrote , in 1813 : “Where they burn books, they end up burning people.”