Visual Art: Why Gretchen Bender’s work is ripe for revival

The late American media artist was ahead of her time, but her reputation is now catching up with her powerful work; and Mayo artists respond to their home county 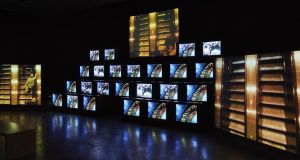 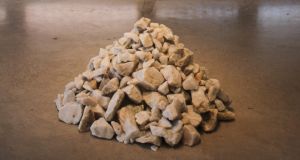 Gretchen Bender’s 1987 “electronic theatre” installation Total Recall shares its title with Paul Verhoeven’s film adaptation of Philip K Dick’s sci-fi story We Can Remember it for You Wholesale, starring Arnold Schwarzenegger and released in 1990. The film title may well have been Bender’s source. Mike Pinnington’s commentary states that Bender trawled through film trade publications, “such as Variety, for as yet unreleased film titles” and that, as with most films, the project that became Verhoeven’s Total Recall had been doing the rounds for several years before going into production.

It would make sense if Bender did co-opt the title of the paranoid conspiracy thriller about a future where memories are for sale. Can’t afford that luxury holiday? Buy priceless memories of it. Her own Total Recall envisages an emergent future in which individuals are passive consumers of a mass-media culture shaped by something very like the military-industrial complex, a network of vested interests that neutralise political debate.

Citizens become consumers and, as Marshall McLuhan presciently said, the medium is the message.

Given that Bender was operating at the edge of imaging technology, an area that has undergone transformative development since the 1980s, her installation is still a powerful piece of work. Pinnington points out that she was aware that nothing dates as quickly as the latest technology. More, though, she realised that what is momentarily radical is usually fast subsumed into and commodified by the market: “Style gets absorbed really fast by the culture . . . It’s constantly having to accept the fact that your work will lose its strength.”

Make your way through the parting in Oisin Byrne’s thematic, custom-made curtains at the gallery’s entrance and you find yourself facing a bank of 24 video monitors, flanked by two larger screens and backed by an even larger one in the centre.

A beautifully choreographed 18-minute dance of imagery unfolds across this video field, to Stuart Argabright’s percussive electro-rock-inflected soundtrack. It’s no insult to say that the impact is uncannily reminiscent of a music video, because Bender edited several music videos and clearly influenced the development of the form, which only goes to prove her point about work losing its strength.

She blends imagery from many sources, appropriated and created, including corporate logos, computer-generated animation, television ads and footage from Salvador and The Shining, to create a hypnotic, immersive audiovisual experience. Some commentaries have emphasised the overwhelming forcefulness of this experience, suggesting that Bender’s critique of media overload itself takes the form of media overload. This is true to some extent, but what comes across most strongly is an almost classical sense of dynamic form. There is no sense that the novelty of the technology is leading the way.

Bender is entirely in command of the resources she employs. She died at a relatively young age in 2004. In the past few years her reputation has been in the ascendant. Visit the Project and you will see that her work deserves revival and reevaluation.

There are, it is estimated, more than 300 people living in Co Mayo who would describe themselves as artists, and almost two thirds of them responded to an open call to make a work of art relating to the catchphrase “Mayo, God help us!”.

While the phrase has become a good-humoured greeting exchanged, in all likelihood, between expats, it recalls a much darker time. It is generally assumed to be a response given by those from the county when asked where they came from at the time of the Famine, when the west of the country, particularly, was ravaged by depopulation as people died or emigrated in wretched circumstances.

The density of its pre-Famine population might suggest a salubrious environment, but Mayo was and remains a tough place, geographically and economically, with its many pockets of habitation separated by huge slabs of intimidating bog and uplands, largely bounded by an indented rocky coastline continuously battered by the Atlantic. It’s hardly surprising that the county produces strong, independent spirits, many of whom travel far and wide.

On the other hand, the phrase is also widely invoked in the context of the curse on Mayo’s All-Ireland fortunes. Myth has it that when the county last won the Sam Maguire, in 1951, the bus carrying the returning team ignored a funeral in progress in Foxford, and the officiating priest jinxed the chances of future success so long as members of the winning team survived.

Equally, the phrase might be prompted by the achievement of Msgr James Horan in developing Knock Airport against all odds. More recently, bad news in Mayo must include the Shell to Sea protests against the exploitation of the Corrib gas field, involving construction of a pipeline to the refinery at Ballinaboy, to minimal State advantage.

All of these varied subjects and meanings, and many more, feature in the show, which is, in general, fairly muted and low key. Andrew Smyth’s video projection is a very effective elegiac meditation on Mayo’s football misfortunes. The other of two video pieces is Breda Burns’s account of what might be called a Mayo of the mind, showing how people have made their own personal worlds within the epic scale of the county.