Visual art: The RHA’s phoenix-like rise from the ashes

It’s original home burned down during the Rising, but the RHA has become a vital part of the Irish art scene 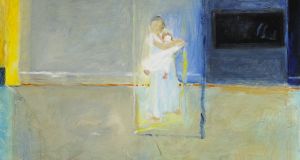 Detail from Within Herself by Veronica Bolay 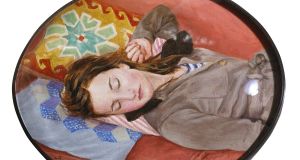 Detail from Dreamer by Liz Rackard 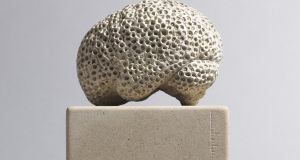 The Irish Times is thought to have played an indirect part in the destruction of the RHA building during Easter 1916. When the Rising began, the RHA annual exhibition was in full swing at Academy House on Lower Abbey Street. Visitors were ushered out, but the keeper, painter Joseph Malachy Kavanagh, whose living quarters and studio were in the building, remained in residence. As RHA historian John Turpin recounts it, Academy House initially weathered the storm unscathed and wasn’t commandeered by combatants on either side.

Two days into the fighting, Kavanagh ventured out and felt comfortable enough to return to Academy House. He was painting on April 27th, in a room overlooking Abbey Street, when the gunboat Helga began lobbing shells at the GPO. A piece of shrapnel pierced a window and flew into the ceiling above Kavanagh. Ground batteries were also involved in the shelling.

A group of volunteers had taken rolls of newsprint from the nearby supplementary office of The Irish Times. These sturdy objects made up the core of a barricade across Abbey Street. Hit by incendiary shells, the barricade began burning fiercely, and the flames spread, finding fuel in the sheds behind Wynne’s Hotel and jumping from there to the academy’s galleries.

Kavanagh had to flee for his life, gathering as many papers as he could and dutifully clutching his chain of office. The building was engulfed by fire and everything within destroyed, including the annul exhibition, masses of documentation and numerous other artworks – not least Kavanagh’s life’s work. He never recovered from the loss and died within two years. The Rising was also disastrous for the RHA, which lost its home and a great deal of its material, which dated back to 1825.

That loss was only been made good by the 1985 opening of the academy’s current home, the RHA Gallagher Gallery. The academy had owned the site since 1939 but could only develop it with the support of Matthew Gallagher who, in 1970, generously offered to build a gallery.

For much of the 20th century, the academy was typecast as a prescriptive, conservative institution. In the early years of the Free State, it was seen as embracing a style of traditional representation with a nationalist dimension, turning its back on the many radical developments that had transformed European art from the beginning of the century. In 1943 its ethos spurred the establishment of the Irish Exhibition of Living Art, with the aim of providing an alternative, progressive forum.

True, the academy has outlasted that exhibition. But it has also transformed itself in the process, and it can be argued that the exhibition became unnecessary because its agenda became the new orthodoxy. In a changing art world, the RHA found it had a potential constituency in those who continue to favour representational art made with traditional media, although the terms “traditional” and “representational” have admittedly been stretched. Significantly, with Colin Martin as principal, the RHA school has become much more structured and active, which is vital to its future prospects.

A move to Easter

To mark the centenary of the Rising, the academy moved its annual exhibition from its usual summer slot to Easter, and attracted a record entry. A group of works pays tribute to James Nolan, who died last year (there is a warm tribute in the catalogue by his friend Brett McEntagart), and the inclusion of GPO 1916, the 1966 composition by Thomas Ryan, recalls the 50th anniversary.

It is hard to summarise more than 550 artworks, but here are a few general impressions: there is a wealth of smaller-scale pieces of real quality, especially in terms of painting and sculpture. Drawing is strong, as is print. Photography is comparatively weak and larger work patchy.

Not that all larger pieces disappoint. David Crone’s complex Canopy shines. Mick O’Dea’s relaxed, conversational portrait of historian Joe Lee stands out, as does Molly Judd’s muted Murmuring Lights. Jim Savage shows that drawing can be both subtle and epic in scale. Then there are painters Diana Copperwhite, Michael Cullen, Hughie O’Donoghue, Stephen McKenna and Bernadette Kiely. Large sculptures that make an impression include those by Tim Shaw (Man on Fire), Eilis O’Connell and John Behan.

It’s not the only work to recall last year’s flooding, but Kaye Maahs’s Lakeview is beautifully observed and understated; Maahs is an artist to keep an eye on. And it is worth mentioning that Colin Martin’s work exemplifies how the traditional art of representational painting can be thoroughly contemporary in spirit.