Saints alive (and almost dead): the power of Counter-Reformation paintings

The power of these images goes far beyond their historical significance 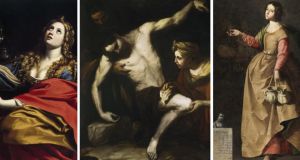 In a way, Passion & Persuasion: Images of Baroque Saints is as interesting for what we don’t see as for what we do. Drawn from the National Gallery’s Italian, Spanish and Flemish collections, it gathers a sizeable group of carefully composed 17th-century paintings. They take the form of individual portraits and theatrical tableaux of varying complexity. Among the individual portraits is a poised, devout St Rufina by Francisco de Zurbarán, for example, her figure and drapery beautifully modelled against a dark background.

She was the daughter of a Seville potter, and in the painting she holds a pair of pottery jugs. She and her sister, Justa, Seville’s patron saints, were martyred when they destroyed an image of Venus, and refused to let their vessels be used in “pagan rituals”.

In Luca Giordano’s dark-lit tableau, St Sebastian Tended by St Irene, the deathly pale, nude figure of Sebastian is being washed for burial by Irene. To her amazement, she finds that, despite being riddled with arrows by Diocletian’s archers, he is alive. The story goes that she went on to nurse him back to health, and became the patron saint of nurses. Alas, once he had recovered, the saint rashly set about publicly criticising Diocletian, and he did not survive his second martyrdom.

St Sebastian became an iconic figure early on and has remained one. Despite her municipal status, the iconoclastic St Rufina has never quite gripped the imagination in a comparable way. These depictions of the two saints both emerged from a particular historical moment, one shaped by the Council of Trent and the Counter-Reformation, the Catholic Church’s response to the challenge of the Protestant Reformation.

In part the exhibition marks the links between the National Gallery and the Irish Jesuits, who, in an amazing act of munificence, gave us Caravaggio’s The Taking of Christ on indefinite loan. The painting, presumed to be a copy, had been hanging in the Jesuit Leeson Street Community for decades. Invited to look over the community’s paintings, National Gallery conservator Sergio Benedetti had a hunch that it was the real thing.

The Jesuits, founded by Ignatius Loyola in 1534, were central to the Counter- Reformation, and Loyola’s Spiritual Exercises, with its emphasis on achieving a mystical, personal relationship with God through a meditative immersion in the life of Christ, was important in indicating an appropriate artistic approach. In particular, the mystical was grounded in the corporeal, as experienced through the five senses. Hence the heightened, dramatised realism of the baroque, and its close attention to vivid, immediate detail. Caravaggio was a key figure in devising this revolutionary style.

While the Reformation had reacted to the “idolatrous” depictions of the saints and downgraded their role – triggering not just the removal of paintings and statuary from public display but in many cases their physical destruction – the Counter-Reformation took a different corrective approach. So long as the painting reflected the documented life of the subject, and kept within certain bounds of correctness, artists were free to represent the saints as exemplary champions of the faith.

And the more convincingly, physically real it was the better, a road that may have led eventually to Mel Gibson’s The Passion of the Christ. The Catholic Church, in other words, had a sound grasp of the importance of images.

In David Freedberg’s influential 1989 book The Power of Images, he draws on myriad examples to argue for images’ capacity to affect us in fundamental, instinctive, psychological ways, even while we tend to overemphasise aesthetic and cultural readings. In the book he explores one of the most infamous iconoclastic episodes with its roots in the Reformation: a three-month onslaught on religious paintings and sculptures in the Netherlands in 1566. An image is always more than the information it encapsulates, he concludes, and it is this something else, the vitality or the magic we see in it, or perhaps project on to it, that leads us to value, prize, venerate or, indeed, to try to obliterate it.

His attitude suggests a very good way to approach Passion & Persuasion, or any other exhibition. The temptation might be to locate it firmly in its historical context, and see the paintings as historical documents. They are partly that, and it certainly helps to be able to understand the narrative and stylistic framework of each piece. But we should also allow ourselves to look at them outside such frameworks of meaning, to be open to the power of the image.

One implication of Freedberg’s argument is that we should not ignore the power of images. They will always outflank attempts to control them and they will retain their power. Inevitably, Reformationist zeal had unforeseen consequences, extending way beyond encouraging the development of the baroque. Even more significantly, perhaps, it left room for the advent of a secularist art to a degree that could not have been remotely imagined. Religious art, meanwhile, having been at the forefront of pictorial exploration, became progressively more limited and circumscribed.

More recently, Jackie Wullschlager in the Financial Times noted David Hockney’s application of a popular quote from Freedberg to the current supremacy of conceptual art: “When the history of art parts company with the history of images, the power is with the images – and art becomes just a small thing.”

Patrick Freyne: It is now late-period Dermot Bannon. He is on the verge of losing it
3

The Clean Body: A Modern History – Dirty secrets from the past
8