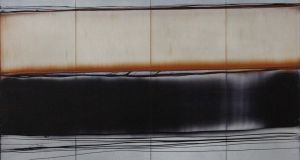 Charles Tyrrell at the Taylor Galleries: he has embraced the inherent nature of aluminium 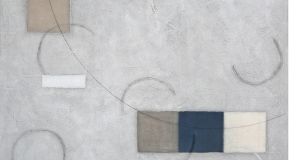 In 1983 the painter Charles Tyrrell was living and working in inner city Dublin. His studio was a high-ceilinged, upper-floor room in a palatial, if rundown Georgian building.

Born in Trim, Co Meath, Tyrrell had attended NCAD, graduating in 1974. In other words, his attendance coincided with a disruptive time at the college, leading eventually to a shift in the nature of the institution.

A small group of part-time lecturers, including Charles Cullen, Charles Harper and Alice Hanratty, tended to sympathise with the student body in its push for reform. With things in a state of flux, it was a challenging time to be a student – or a teacher, for that matter.

Tyrrell and some of his contemporaries, such as Martin Gale, were exemplary in that, while expecting little in the form of academic support, they applied themselves to their work with a steady, determined zeal. They found their own sources of inspiration and instruction, looking well beyond the reach of conservative convention.

Several decades on, that remains true of both artists. They work in quite different ways: Gale representational, Tyrrell abstract. But they share qualities of industry, concentration and self-critical rigour.

Tyrrell’s work allows many lines of interpretation. You can, as you choose, read it metaphorically, analogically, symbolically or just visually. He is not, as he put it himself, “abstracting from the real but coming the other way round; starting down at a clear simple abstract place . . . and rising towards an image that incorporates the human reality of confusion and fallibility.”

A dynamic sense of engagement, struggle and resolution comes through vividly.

In 1984 he made an unlikely move to the remote, rural location of Allihies on the Beara Peninsula, which has been his base since. Around the year 2000 he began to make paintings on aluminium, quite a different surface to the canvas stretched on a wood panel he usually employs.

There’s friction and resistance to canvas and an incremental, layered quality to the finished work. Smooth metal, by contrast, is frictionless, slippery, fast. It demands, Tyrrell wrote, “swiftness of movement and thought”.

As paint is applied and/or removed, the process “only allows for real consideration of the immediate”, though he does lay down the ground rules of each composition by etching a geometric framework into the aluminium.

When he began using metal initially it seemed as if he was trying to figure out how to tame it, so to speak, so that it would fit into his established way of working. Now he has embraced its inherent nature as a means of further exploration, relishing its speed and responsiveness, the way, as he puts it, a work “springs into place at some point within a series of individual choreographed moves”.

While clearly exhilarating, the experience triggered “a need for a change of pace” . . . a change more extreme than just returning to canvas. When he moved from Dublin to Allihies he brought a quantity of the salvaged St Peter’s wood with him, and he decided to revisit it.

There’s a fruitful contrast between the impassive aluminium surfaces and the wooden constructions – each wood piece is a construction, a geometric arrangement of sections of board, cut at right angles or diagonally.

He doesn’t just paint the wood. He also scores parallel lines into it, burns it to produce a charred, black surface and sands it down. As ever, the geometry is counterpointed with amorphous shapes and passages.

The multiplicity of layers, textures and densities serves to accentuate and enhance the flatness of the aluminium works. The two paths converge beautifully.

The title of Felim Egan’s show is apposite. It is as if he is testing the water with a group of three substantial new paintings, handsomely installed in the main space of the Cross Gallery.

Several of the smaller pieces we have become more used to seeing by him occupy the rest of the gallery. They are made with his usual elan and delicacy of touch, but they can seem almost formulaic in their deployment of a few well-tried motifs.

In fact, that is not quite fair, as each is thoughtfully constructed, playing on spatial symmetries and colour harmonies. All of which is more evident in the larger paintings, which have a pleasingly weighty grainy, stony texture. They are called Constellations and evoke celestial diagrams with patterns of discs and arcs.

Unusually for Egan, these diagrammatic elements are informal and geometrically distorted. His visual language has long inspired musical comparisons for its rhythmic, harmonic qualities, specifically minimalist music with its gradual, repetitive structures. That certainly holds true here, with a few notes that hint at a potentially energising instability.

Books of 2020: Max Porter, Emilie Pine, Sara Baume and more pick the best reads of the year so far
7

The Jakarta Method: The US playbook of suppression across the world
10

Colson Whitehead: ‘I lacked imagination to conceive how terrible Trump would be’
Real news has value SUBSCRIBE