Lazarides helped make Banksy’s career but now he’s focusing his energies on other artists, such as Conor Harrington 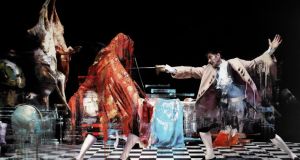 Detail from Dance with the Devil by Conor Harrington 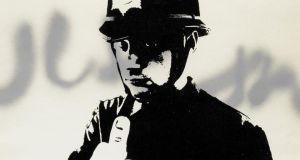 Detail from Rude Copper by Banksy 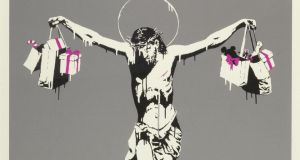 Detail from Christ with Shopping Bags by Banksy 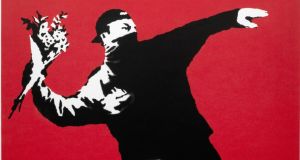 Detail from Flower Thrower by Banksy 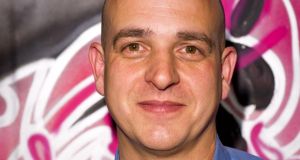 Six years have passed since the elusive king of street art Banksy and his former founding agent/public face Steve Lazarides parted company, but that’s stopped neither in their tracks. While Banksy has gone from strength to strength being Banksy (he’s now worth an estimated €18 million), fellow Bristolian Steve Lazarides has continued to champion street art in its wider form via his two galleries, Lazarides Rathbone and Lazarides Editions, countless exhibitions and his high-end network. He co-curated a show with Kevin Spacey. He’s the guy Morgan Spurlock calls when he wants new art. Jared Leto invited him to his new home in LA to talk shop. If there’s a central figure in the business of street art, Steve Lazarides is it.

There was much to be read in Lazarides’s sale of more than 30 Banksy items from his personal collection on January 28th at London auction house Bonhams, including signed screen prints, two sculptures and a memorabilia box from 2003. Was he washing his hands of his former associate? Is the bottom falling out of the street art market? Is Banksy old news?

No, no and thrice no, he insists.

“I’ve never dealt in the second-day market, so I’m just testing the water,” says Lazarides. “It’s definitely not me stepping out of the Banksy market; I still have significant holdings. I’m never going to tell what percentage of my collection this represents, but I have plenty left.”

That made it easier to part with sought-after prints such as Christ With Shopping Bags, Flower Thrower and his personal favourite, Rude Copper (they sold for between €27,582 and €43,463 each, making more than double their estimates). “Rude Copper means a lot to me. It was the first print we formally worked on together, back in 2002, when I was giving Banksy lifts to and from Bristol. We stopped to pick up these prints, and I ended up selling them from the boot of my car,” says Lazarides. “So I’ve definitely hung on to another copy of it.”

Parting of the ways

Those Banksy years paved the way for Lazarides’s career as an “accidental art dealer”, yet he recalls the end of their relationship more with factuality than sentimentality. What was their last conversation?

“Years and years ago: he was complaining about eating too much cabbage. We didn’t have a big argument, we just parted ways. There was no animosity, yet no great friendship between us either. We didn’t hang out socially. But for work, it was the most incredible time. I don’t regret one single minute of it.

“I’m a magpie more than a collector, so I can let these pieces go. I see it as a way of reinvesting the money in newer artists, which is what I’ve been doing all along.”

Indeed, he has lent his weight to a new generation of guerrilla artists such as Afghanistan-based Shamsia Hassani, famed for her depictions of women in burqas, and Portgual’s Vhils, who creates building-sized portraits. And this latest auction, titled Founded 1793, was a watershed moment for one of his long-time charges, Cork-born Conor Harrington. the 34-year-old, based in Brick Lane, London, with a degree in fine art from the Limerick School of Art and Design, melds classical and contemporary to create subversive pieces – a visual equivalent of 2ManyDJs’ dance tent remix of Beethoven. Many will remember his striking mural emblazoned on Bang restaurant in Dublin in 2011.

Boosted by the success of Harrington’s debut US exhibition, Eat and Delete, last autumn (for which Lazarides was at the helm), his pieces have gone from fetching €3,000 in 2005, when they first began working together, to €103,644 for his sole painting in Wednesday’s auction, the oil/spray paint piece Dance with the Devil. It was the highest price paid in a sale that also featured Banksy, Damien Hirst and Grayson Perry.

“His work is going as fast as he can make it,” says Lazarides. “The last time we released his screen prints, it crashed our website. There aren’t many artists who have that pull.”

The buzz about street art

But if the overall buzz about street art has lessened since Banksy first captured imaginations in the early 2000s, Lazarides – who has more than a vested interest in the matter – insists that it’s not a reflection of declining interest, but a reflection of its accepted status.

He says that “2007 was a gold rush. This was when there was no sign of recession and talk was of who was making how much money and what they were buying. People bought anything from anyone. Since then, buyers are only interested in quality work, which is great for me as I deal with the top of the food chain of street art. Good artists in that field are selling for very good money: [French artist] Invader sold for £193,000 [€226,000] in Sotheby’s last week. And yesterday an unsigned Banksy print went for £3,500 [€4,700].”

Which also implies the rouble crash in December has yet to have an impact on the art market? “It won’t affect my end; the people who buy street art aren’t showboating collectors,” he says. “The crash is likely to show at the top end of the market. These collectors might not have £10 million to spend on art but they’ll buy something for £300,000.

“In fact, when Greece and Spain had the debt crisis, we actually saw a rise in investment. Street art is accepted as a wing of contemporary art now, and it’s seen as an asset, whereas it wasn’t in the past.” He pauses to reflect on this, and then adds, with a hint of pride: “We’re part of the establishment, as f***ed-up as that is.”