Loadsa Monet: the rich Russian who patroned Picasso, made Matisse

After being trapped behind the Iron Curtain, Russia’s Shchukin collection, including works by Picasso and Matisse, is back in Paris for a blockbuster show 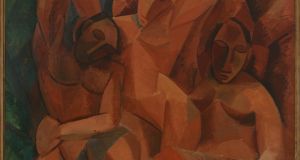 Three Women (1908), by Pablo Picasso, comes from the Hermitage museum in Saint-Petersburg. 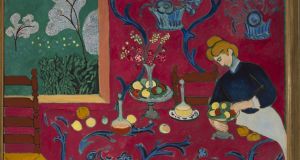 Harmony in Red (1908) by Henri Matisse, from the Hermitage museum. 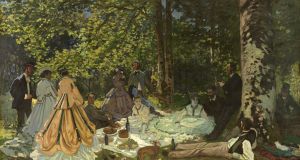 Luncheon on the Grass, by Claude Monet (1866). From the Pushkin Museum. 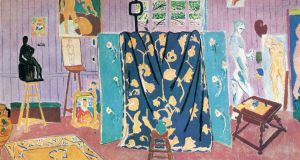 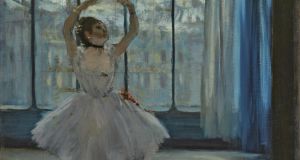 Detail from Dancer in Front of a Window (Dancer at the Photographer’s Studio), circa 1874-77, by Edgar Degas. From the Pushkin Museum in Moscow.

Few experiences can rival the chromatic jolt, the wave of beauty that engulfs one on entering the Matisse room at the Icons of Modern Art exhibition at the LVMH Foundation in Paris.

Sergei Shchukin’s magnificent collection of Impressionist, post-Impressionist and early modern art was virtually imprisoned behind the iron curtain for most of the 20th century. After the collection was nationalised by Lenin in 1918, Shchukin’s role was obscured by Soviet authorities. In 1948, Stalin split the collection between the Pushkin Museum in Moscow and the Hermitage in Saint-Petersburg.

Today, the collection is such a source of national pride that President Vladimir Putin wanted to inaugurate the exhibition, but he cancelled his visit to Paris over French condemnation of the Russian bombardment of Aleppo.

“The works we’ve brought together here left France more than a century ago,” says Anne Baldassari, the former director of the Picasso museum and commissioner of the LVMH exhibition. “For decades, they were practically banned from being shown, for ideological reasons, as ‘bourgeois art’. The collection couldn’t be seen, because of the geographical and ideological distance. That’s why, to this day, the Shchukin collection remains legendary.”

Russian museums have lent elements of the collection since the 1990s, but not on this scale. “There were important works that could not travel, because they were so damaged on the journey to Siberia for safe-keeping during the second World War,” says Baldassari. “But the essence of the collection is here. Even in Russia, they were never reunited, because they belonged to two great museums in competition with each other.”

Shchukin, a textile millionaire, purchased 275 canvases, including 50 Picassos, 38 Matisses and 13 Monets, between 1898 and 1914. He spirited them off to Moscow, sometimes with the paint still wet. Most have not been seen in the west since.

The art critic Yakov Tugenhold described Shchukin’s Trubetskoy Palace in 1914 “with those pale green wall hangings and the pink ceiling and the cherry-coloured carpet on the wooden floor, amidst which Matisse’s raspberry and emerald colours begin to brightly and joyously glow”.

Matisse’s colours still glow, more than a century later. Pink Studio, commissioned by Shchukin in 1911, was restored by the Pushkin Museum in preparation for the journey to Paris. The painter’s studio was obviously a happy place, with its pink floor, lavender striped walls, nude sculptures and paintings and view onto a verdant garden.

Harmony in Red, also commissioned by Shchukin for his home, faces it.  Shchukin wanted the background to be blue, to complement the Gauguins in his dining room. But much as he needed Shchukin’s custom, Matisse insisted the painting had to be red.

The earliest Monet purchased by Shchukin was Luncheon on the Grass (1866), Monet’s prim response to Manet’s eponymous, scandal-provoking canvas. It was painted out of doors, a basic tenet of the then nascent Impressionist movement. Only fragments of the finished painting survived, so the study purchased by Shchukin is the sole record of the original.

Shchukin’s Monets span the great Impressionist’s career. The last canvas he purchased, Seagulls, River Thames, Houses of Parliament (1904) is quintessential Monet, with gulls barely suggested in misty mauve light, before a ghost-like Westminster. There are even water lilies in the foreground.

In 1898, Shchukin visited an exhibition at Ambroise Vollard’s gallery in Paris, centred on Gauguin’s Where Do We Come From? What Are We? Where Are We Going?. The title painting was already sold, but Shchukin bought up as many Gauguins as he could. He hung them on his dining room wall in the form of an iconostasis – the screens bearing icons that separate altar from nave in Orthodox churches.

Shchukin was a member of the “Old Believers,” who broke off from the Russian Orthodox Church in the 17th century, in protest at reforms. Though long persecuted, the Old Believers were prominent among wealthy industrialist families. As a devout Old Believer, Shchukin was troubled by nude paintings. He attempted unsuccessfully to persuade Matisse to clothe the figures in The Dance and Music, which he commissioned for his Trubetskoy Palace.

Shchukin made an exception for the exotic primitivism of Gauguin. Aha Oe Feii? (What? Are You Jealous?), painted in Tahiti in 1892, shows naked Tahitian girls, lolling on a beach or riverbank, discussing their conquests.

Shchukin forced himself to buy paintings he didn’t like, says Baldassari. “Each painting is a trial for Shchukin. He doesn’t buy them out of pleasure or desire . . . He is fighting his own taste, motivated by his own resistance, a sort of negative compass . . . He believes profoundly in the artists, and trusts them more than himself. He says of Picasso: ‘I don’t like his work, but Picasso is right and I am wrong.’”

Shchukin had met the American brother and sister collectors Gertrude and Leo Stein at Vollard’s. The Steins introduced him to Matisse, and Matisse introduced him to Picasso. He purchased his Three Women (1907-08), a landmark cubist painting, from the Steins at the time of their “divorce”.

Three Women is the counterpart to Demoiselles d’Avignon, which belongs to MoMa in New York. Both paintings were ridiculed. “The Demoiselles remain figurative in a way,” says Baldassari. “There’s a still life, an almost traditional feminine allegory. . . but Three Women was extremely daring for the time; a world-changer.”

Shchukin is often assumed to have collected art as a consolation. His eldest son drowned in the Moskva river in 1905. His wife then died of cancer. Stricken with a brain disease that caused terrible migraines, a second son took his own life in 1910, on the anniversary of his mother’s death. And Shchukin’s brother Ivan committed suicide in Paris.

Shchukin’s collection was half constituted before the succession of tragedies. But, Baldassari notes, “the way he collected changed. He had nothing left in life and felt profoundly guilty. The collection became his sole objective, was a form of redemption.”

Shchukin opened his home to the public, as a modern art museum, from 1908. Young Russian artists, including Malevich, Kliun, Rodchenko and Goncharova became regular visitors. “They pushed him to go farther,” Baldassari says. “They made fun of Shchukin, because he stammered and made speeches . . . It amused them that an industrialist tried to explain art to them . . . He bought Matisse and Picasso to enliven the debate. There was a real dialogue between them.”

Shchukin had decided to leave Russia before the Bolshevik revolution. He remarried and fathered a little girl, Irina. Legend has it that her doll was stuffed with diamonds when the family left for western Europe.

In 1922, Shchukin and his new family settled in a comfortable Paris apartment, with servants. Perhaps because he associated art with grief and mourning, Shchukin had nothing more to do with painters or dealers.

Yet his influence remains immeasurable. As one of the first patrons of Matisse and Picasso, he transformed their lives.

The Paris exhibition has prompted the directors of the Hermitage and Pushkin museums to ask the Russian government to restore Trubetskoy Palace, long used as a government ministry. They want to organise a rotating, permanent exhibition of Shchukin’s collection, in its original home. If the plan comes to fruition, it will be another triumph of art over history.

1854 – Sergei Shchukin is born in Moscow to a wealthy, textile-trading family.

1898 – Shchukin buys his first painting in Paris. By 1914, he will have amassed 275 Impressionist, post-Impressionist and modernist canvases.

1908 - Shchukin transforms his Moscow home, the Trubetskoy Palace, into a public museum which is frequented by Russian avant-garde painters.

1918 – Lenin nationalises the Shchukin collection. Shchukin goes into exile, first in Weimar, Germany, then in France, where he dies in 1936, age 81. His heirs evaluate the collection of which they were dispossessed at €10bn.

1941 – Nazi Germany attacks Russia. The Shchukin collection is hastily packed and transported by train to Novosibirsk, Siberia, until the end of the war. Some paintings are badly damaged.

1948 – Stalin divides the Shchukin collection between the Pushkin museum in Moscow and the Hermitage in Saint Petersburg.

1956 – Three years after Stalin’s death, a Picasso retrospective at the Pushkin and Hermitage museums begins the rehabilitation of “bourgeois” art.

October 22nd, 2016-February 20th, 2017 – For the first time in more than a century, the best paintings of Shchukin’s collection are reunited in the West, at the Icons of Modern Art exhibition at LVMH Foundation in Paris.