Liliane Tomasko: ‘I don’t think of myself as an abstract artist’

For the Swiss-born artist and photographer, the unmade bed is a metaphor for the reality of daily life 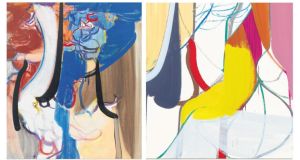 Left, The Slow Reveal; and, right, Yellow Leaning on Flimsy Greens (both 2015) by Liliane Tomasko 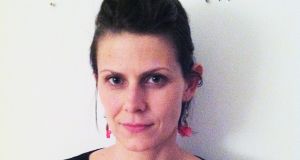 Look into the office space of the Kerlin Gallery on your way to the main gallery and you’ll see a series of photographic nocturnes by Liliane Tomasko: muted grey studies of crumpled bed linen, each dated. These melancholy, almost monochromatic images are the starting points for the paintings upstairs.

But the sleepiness of the photographs gives way to wakeful, lively engagement in the paintings. Lines swoop and curve, corralling swathes of bold, broad-brushed colour. The forms repeatedly echo the shape, weight and detail of the body without becoming representational as such. There’s a feeling of tremendous vitality and expansive, flowing energy.

The prominence of line, the staccato bursts of colour and the easy, rhythmic freedom all mark a shift in Tomasko’s work since her last Kerlin show. Her work then was more representational, more contained, quieter, even cautious. She has obviously been busy. Sense coincides with two other solo shows in the US: one in Miami, Florida, and one in Phoenix, Arizona.

In person, she is reticent and gentle in manner, but she is also quietly determined. She must be, as she has built her career without being overshadowed by her husband, the formidable Sean Scully.

She is quite clear about how she began to make paintings based on bed sheets and beds. “As a young woman, I felt that I wanted to take photographs of the things immediately around me; the things that surround us intimately, to the point where we almost don’t notice them. They constitute a large part of our reality.”

She looked to her everyday domestic routine. “So I had many of these photographs and I was looking at them as sources, and at a certain point I found I kept coming back to one photograph of my unmade bed. It had a particular resonance for me at the time because I had come to the end of a relationship.”

She found it good to deal with lived experience in terms of traces and absence, to refer indirectly but unmistakably to the reality of daily life. “I like the metaphorical quality of the crumpled sheets: the body, passion, restlessness, sleep, the pattern of days, even to make each day as we make the bed.” But, she points out, without overstating it, there is also a direct link between the body, the sheets and another fabric: the canvas.

When she worked from mattresses and stacks of folded sheets, she was emphasising “the routines that hold [life] all together”. Although photographs are her starting points – and she exhibits her photographic prints as works in themselves – the paintings take off in myriad directions.

“They are not representations as such, but I really don’t think of myself as an abstract artist.” Her colour, for example, is not anchored to particular objects. “I never know what to say about colour. It’s emotionally charged. It’s a way of bringing you places. I think a particular sense of colour comes through in my painting, but I don’t plan it. When I look at the palette I feel it’s a bit retro, it reaches back, which is okay.”

Around 2012, she says, line arrived in her painting in a serious way. “The lines grow out of the folds in the fabric, but they have the weight of materiality to them. Willem de Kooning has always been important to me, and I think what I am trying to do with line relates to his painting, except that it seems to me in his case the lines usually described bodies, which is not always true of my work.”

For her, line was liberating. “The work became freer, more open to experimentation. It was tremendously exciting for me.”

Tomasko was born and grew up in Zurich. Although they met in Switzerland, both her parents were Hungarian. They arrived separately as refugees following the Hungarian uprising in 1956, which ended with a Soviet invasion. “So I and my sister were born in Switzerland.”

The family spent their summer holidays in Hungary, and Tomasko still visits family there. “My parents returned there once they retired. I suppose one is always drawn back home.” She says this as though mildly perplexed by the idea. That’s hardly surprising, given her own peripatetic existence. She is glad to retain connections with Hungary, but cannot see herself settling there. She studied art in London, at Camberwell, Chelsea and the RA. Since then, she has been based in Germany, Barcelona and New York, with much moving around between.

Where would she consider home? “Everywhere and nowhere. I’m aware of this sense of not belonging, a certain insecurity. It’s not that I don’t fit in. I mean, I do speak several languages [English, German and Spanish] but I’m not sure which one I feel at home in.”

To her surprise, she feels very comfortable in New York. “You feel you can do things there. There’s a sense of openness and possibility. Europe is great, but somehow everything becomes an argument; so many identities, so many fixed ways of doing things, so many different cultures in a small space. In America, more or less everyone speaks the same language, an obvious thing but it’s important. I know there are serious issues in the US, but I feel Obama has made a big difference.”

They were based on the Lower West Side but have moved to the Hudson Valley. “It’s very close to Manhattan but it’s very rural.”

Initially they commuted to their city studio, but in time they found a suitable building nearby and now they both work there. It is close to ideal, Tomasko says. “I find it means I work more slowly. I work on several pieces at once.”

She likes to leave individual works aside and come back to them. At the end of the working day, she photographs her work-in- progress. Her eyes light up.

“When you leave the studio you’re leaving your thoughts behind. Glance at a photograph, and you’re right back there.”