Joy Gerrard: ‘I was thinking about how crowds react to a space of fear’ 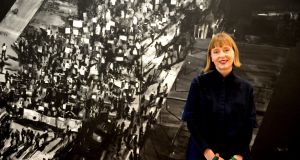 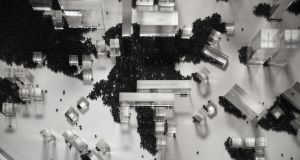 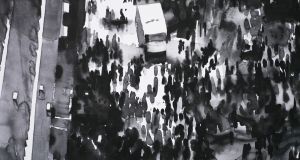 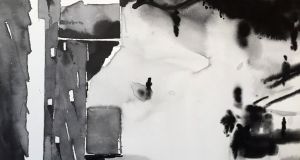 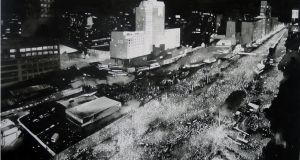 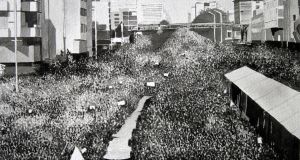 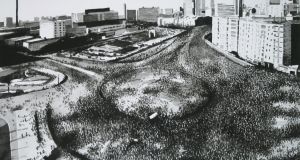 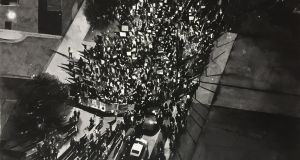 Upstairs, in one of the large galleries at the Royal Hibernian Academy in Dublin, Donald Trump and Vladimir Putin face off against each other. The pair feature in a series of large-scale paintings by Joy Gerrard, who has spent the past decade observing images of protest crowds, and building up an enormous archive of photography. These are drawn from newspapers and the internet, and she uses them as a source for her work.

The Trump side is to the right. People cluster thickly alongside huge, dark buildings in two paintings taken from aerial shots of a protest against a campaign rally in Chicago in 2015. In that instance, Gerrard says, the rally had its effect, in that Trump cancelled his scheduled appearance. Opposite, anti-Putin protests take over the streets of Kiev and Moscow. On the end wall is a Black Lives Matter march from Charlotte, North Carolina in 2016. Gerrard works in Japanese ink on linen, so the blacks are deep and glossy, and, while each image is striking in itself, the effect of them all together is overwhelming. Looking at them, I don’t know whether to feel dot-small, or empowered by the sense of solidarity and the idea of what the individual can do when we form a group.

In this, Gerrard’s first solo show in Ireland since 2003, she builds on her long-abiding interest in maps, architecture and cities. Her research into crowds dates from 9/11 in New York in 2001, 7/7 in London in 2005 and their aftermath.

“Initially, I made architectural models and set-ups that were ambiguous,” she recalls. “You didn’t know what the crowds were doing. I was trying to summon up a space that could potentially be apocalyptic, but it wasn’t specified.”

Born in Ireland, Gerrard was bought up in Co Tipperary, and first studied art at Cork’s Crawford College. Some hugely evocative drawings of Cork City’s docklands date from this time. She then transferred to Dublin’s NCAD before going on to the Royal College of Art in London, the city where she now lives. Her career has also included major public art projects, including a striking installation at the London School of Economics.

Nevertheless, that “space of fear” was something Gerrard felt strongly while living in London, as well as the difference between how things may affect you personally, and how they are reported in the media.

“We don’t have a sense of the scale of the tragedy, or the personal consequences, until something happens that affects you.”

Another set of crowds came with the Iraq War protests, and a personal tragedy.

“In 2003, my younger brother Charles died very suddenly, and then two days later the Iraq War broke out. I’m not equating the two things, but the personal, familial tragedy that happened gave me a stronger sense of how something could affect you, some understanding of cataclysm. My own life and that of my family members had been shattered.”

“Then, looking at the first bombings on television,” she says. “They were actually incredibly beautiful.”

For an artist with Gerrard’s acuity, seeing something terrible also being incongruously beautiful, was profound.

“I was also looking at the idea of the possibility of changing something.”

Tall and willowy with strawberry blonde hair, and big, expressive eyes, Gerrard is beautiful herself. But she’s also steely, and it’s a quality she has needed to survive and thrive in one of the art world’s competitive centres, and as the mother of three small children. She has been vocal about the visibility of women artists, and a commercial art world shaped to suit a male career progression in which primary childcare isn’t usually an impediment. The situation is, she believes, better in Ireland. An Arts Council bursary has been instrumental in buying childcare to complete this work.

“It hasn’t always been okay to say you’re ambitious, as a woman,” she has said in the past. “But I am, I’m ambitious for this work.”

This project has been more than a decade in the making, and it is garnering attention. Nick Serota, who last year announced he was stepping down as director of Tate to become chairman of the Arts Council of England, visited her solo show at London’s Peer gallery in 2015, while last year she was shortlisted for the Mac International, and won an award at the RHA Annual.

“The drawings are quite precise,” she says. “But when they translate to the painting, they become something else.”

The use of Sumi ink came when Gerrard was searching for a particular “cold, dense black”. Her brother, the artist John Gerrard, had brought a block for her back from Japan.

“It has to be ground up, so it goes through a material change before you can use it. It’s also a volatile material, as you use it wet on wet, so it’s very difficult to control. But it gives you a spontaneity, and it just started working for me, connecting with the volatility of the crowds, the circumstances which led to them all being on these streets.”

Painted on linen, the scenes become, as Gerrard puts it, “much more about this encroaching darkness. You get shades of dark, which disturbs the schema of the image. As you go up the scale, you move to abstraction. It’s not great if you have an amazing photograph. At this scale, you’re much better off with an out-of-focus one – then you can make up the information yourself. That’s when the art starts happening.”

More recently, a new set of protests have been taking place in the aftermath of Brexit.

“The vote was so close, but everyone immediately seemed to acquiesce. I felt it was important that people remained visible.”

“The read from speaking to other people is that we’re closer to catastrophe than we have been at any other point in history – because of the volatility of Trump. It feels abstract, and that goes back to the personal versus the global. With Brexit it felt really personal, like the rejection of a whole lot of things.

“But there is possibility for transformation, and protests can affect democratic processes. Trump and Brexit were, after all, protest votes; it’s like people were looking for a simplistic fix for the problems of globalisation . . . I do think the world is becoming a less generous place.”

Around us in the gallery, Gerrard’s images of those people who took their feelings to the streets seem to add weight to her words. Huge corporate and government buildings, symbols of power, individuals, the system, acts of disobedience and disruption, the forces of law, the spontaneous outpouring of feeling – abstract from a distance, emerging up close.

Joy Gerrard now has an archive of more then 10,000 images of protest crowds, and has been developing a separate series of the final 100 days of 2016.

“I’m really excited about these paintings,” she says. “I feel almost as if I’m just starting out, and I want to spend more time with them.”

Joy Gerrard: Shot Crowd is at the RHA until March 26th rhagallery.ie