Caravaggio exhibition to open to the public on Saturday

A new exhibition at the National Gallery of Ireland, 'Beyond Caravaggio,' brings together work by the artist, known as the 'bad boy' of 17th century European art, with paintings by thirty major artists who were inspired by him. Video: Bryan O'Brien 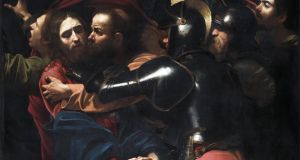 The National Gallery’s spectacular new exhibition on the works and influence of Caravaggio opens to the public on Saturday in Dublin.

The show is one of several major exhibitions by the gallery, as it prepares to reopen the Dargan and Milltown wings, which have been under renovation since 2011. They are due to reopen in June.

On first entering the gallery, viewers will see the relatively small Boy Bitten by a Lizard, 1594-95 (from the National Gallery, London) and Boy Peeling Fruit, circa 1592 (from the Royal Collection), which are given space to breathe, as well as the large-scale Christ Disputing the Doctors by Antiveduto Grammatica and Christ Displaying his Wounds by Giovanni Antonio Galli. It’s a clever piece of curation, giving an index of what’s to come: the mastery of technique and skill, and the everyday subjects in the two Boy pictures; the flair for grand scale, dramatic storytelling, which influenced Grammatica; and the striking, direct placing of subjects, as the Christ in the Galli painting looks directly at the viewer.

The show brings together 40 major works, including four by Caravaggio: The Supper at Emmaus, 1601 (National Gallery, London); The Taking of Christ, 1602 (which is from the National Gallery’s own collection), as well as the two Boy paintings, which have never been seen here before.

To cope with demand, the National Gallery has put a booking system in place for tickets. These cost €15 full price or €10 concession. Tickets on Tuesday are €10 all day and €5 between 5pm and 8.30pm on Thursday evening. See nationalgallery.ie for details.