Grafton Architects, the Irish team behind the spectacular University of Engineering and Technology in Lima, wanted to create a building that was ‘specific to this unique place on earth’ 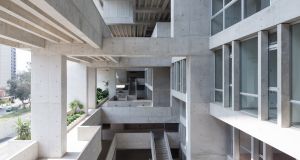 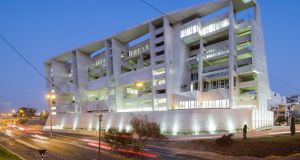 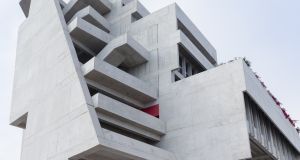 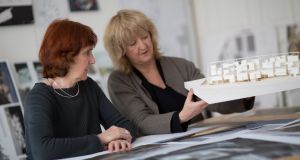 Drive south on Lima’s coastal highway and the city’s beachside cliffs loom above you until a ravine cuts a path inland. Take this road and quickly rearing up ahead is the most dramatic addition in years to the Peruvian capital’s skyline: the “vertical campus” of the University of Engineering and Technology, or Utec.

The soaring concrete structure, perched above a dual carriageway on the canyon’s lip, at first appears to be a continuation of the cliffs a kilometre back. But this imposing north face tells only half the story of a startlingly original building that, from its 10-storey heights, cascades southwards in a series of terraces. It creates a sense of architectural drama that is even stronger once you enter the building.

This is the creation of the Irish firm Grafton Architects, whose economics building for Luigi Bocconi University, in the Italian city of Milan, was named World Building of the Year in 2008. In Ireland the company’s best-known work is probably the Department of Finance offices on Merrion Row in Dublin.

For their first project in South America, Grafton’s principal architects, Yvonne Farrell and Shelley McNamara, set out to capture the essence of the Latin city, which is sandwiched in the tropics between the Pacific Ocean and a desert.

That led them to study the country’s geography and history. They were fascinated by Lima’s sea cliffs on their first visit to the city; these now find a concrete continuation in Grafton’s “man-made cliff”, while the terracing tumbling southwards echoes the intensive use of terrace farming by Peru’s pre-Columbian civilisations.

The urban site was challenging. The north-facing facade helps to block the noise of traffic rising from the ravine below. But this monumentalism, which faces the high-rise neighbourhood of Miraflores, is reined in as it approaches quiet, low-rise, bohemian Barranco, to the south.

The terracing means that Utec’s larger spaces, mainly laboratories, are on the lower floors, with successively smaller arrangements of classrooms and academics’ offices stacked on top, as if to create a giant’s staircase, all of it leaning against a series of enormous concrete columns.

These north-leaning overhangs create a giant atrium, shaded from the equatorial sun, where the architects have placed most of the building’s staircases and walkways. As these are open to the cooling ocean breeze that blows up the ravine, the university needs less of the expensive, environmentally unfriendly air conditioning that other buildings might require.

The narrower upper floors have expansive views of Lima. The effect is akin to being suspended within these panoramas rather than merely looking out on them.

“Students will be able to see back to the mountains, the sea and the desert and know where they are. What we are always trying to do in our work is heighten awareness of place,” says Yvonne Farrell.

The building’s design creates many of the informal communal areas that are at the heart of every university’s social and cultural life. As the designers say, they have built a vertical campus rather than another high-rise office block that happens to house an educational institution.

The most charming of these areas are the south-facing terraces, generous outdoor spaces whose plants will eventually spill over to create hanging gardens. The building’s roof has what the architects have called the university’s loggia, a partially covered rooftop terrace, above the institution’s library, where students can take advantage of Lima’s mild, dry climate to study in the open air.

The commission for the building was organised by the philanthropic Hochschild family, whose endowment to the university is an extension of their support for poorer Peruvian students. When it went to Grafton there were grumbles that the only foreign firm on the shortlist had been selected.

But according to Alejandro Shell Montero of Shell Arquitectos, the Lima practice that oversaw the project’s execution, the building’s originality has since won wide acceptance, even before ground has been broken on the second stage, which will complete the campus. “Utec has opened up exciting new frontiers for Peruvian architecture,” he says.

The importance of this should not be underestimated, Montero adds, in a country undergoing a physical transformation as a result of years of strong economic growth.

Key to that acceptance have been Grafton’s efforts to create a building that, in Farrell’s words, is “specific to this unique place on earth”. Many architects cite similar ambitions, but as the instantly recognisable work of many so-called starchitects demonstrates, as it is dropped into very different locations and cultures across the globe, they are not always able to realise them.

If Grafton has a house style, it is its concern with context and its belief that architecture is the “new geography”. Utec is very different from the company’s university building in Milan, but it shares its intense concern with place. It echoes Lima’s geography and responds to its climate, and its subtle take on brutalism both recalls a much-maligned architectural movement that was so influential in South America and also references the building techniques of Peruvian culture before the arrival of Europeans. “We hope Utec feels like a university in Peru, that it is not like a university in any other place,” says Farrell.

Grafton will need to draw on its core value of sympathetic engagement with local context for its next project. The company is about to step into the architectural minefield of Georgian Dublin, having won, in partnership with its fellow Dublin firm O’Mahony Pike, the commission to redevelop the ESB’s little-loved headquarters on Fitzwilliam Street in Dublin.