Spotify trusts you; Amazon monitors you 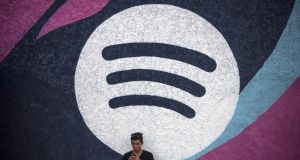 The Spotify logo. The further down the work ladder you are, the more employers will believe you need to be controlled.

When Spotify workers need a new keyboard, they go to a shelf and take one. There are no forms to fill in and no one to ask. There is just a sign saying how much each keyboard costs.

Kristian Lindwall, whose title at the music streaming company is “agile coaches team lead”, told us this at a human resources conference in Barcelona last week.

His talk was about Spotify giving teams autonomy. His job seemed to be to help the teams, but not to hover over them. “People are self-motivated and they want to do great work,” he said.

Setting up elaborate approval processes for workplace equipment not only interfered with that aim; it ended up costing more. “It’s cheaper to give someone a keyboard than for people to go through two sets of approvals that take a week,” he said.

Judging by reviews on the Glassdoor jobs website, some employees find these autonomous teams “chaotic”, with “duplicate and uncoordinated efforts”. But 87 per cent say they would recommend the company to a friend.

As a consumer, I find Spotify’s service entirely satisfactory. But I feel the same about Amazon, which only 64 per cent of employees would recommend to a friend, according to Glassdoor. Employee reviews — “people making minor mistakes are punished; breaks are limited, exhausting the workforce and making people hate work” – reflect recent press coverage, which Amazon contests, stating that it used detailed data to monitor both managers and lower-level employees’ performance.

Spotify trusts you; Amazon monitors you. The companies are both stars of the digital age, while also illustrating the sharp divide in today’s world of work. Some companies give their workers freedom while others use modern technology to track their every move.

Traditionally, this trust divide existed inside companies rather than between them, according to an excellent and prescient 2001 paper by Cambridge’s Judge Business School and the Stockholm School of Economics. Managers were trusted, but workers were not.

Max Weber, the great German analyst of organisations, “identified the fact that senior figures in bureaucracy operate with discretion, since it is they who formulate, rather than follow, rules,” the paper said.

Senior figures did not always deserve that trust, of course. In any event, the idea that some should be above the rules began to break down in the 1960s and especially in the 1980s, with the rise of the idea of corporate culture.

Popularised by Tom Peters and Robert Waterman’s In Search of Excellence, corporate culture “was understood as an anti-bureaucratic move” that aspired to substituting values for rules, the Cambridge/Stockholm paper said.

Those values bound everyone in the company together, both workers and managers. It meant employees could be empowered and “less directly managed”. Rather than establishing rafts of rules, employees were educated in the culture. They grasped the values and could then be left to get on with their work without excessive oversight.

It was not always this way. Many companies still had plenty of rules. But this was the ideal. Now the old corporate culture model is breaking down under the strain of global competition, an end to final salary pensions, insecure employment, agency working and outsourcing.

If people are no longer secure in a company then everything changes. “Why should individuals be committed to the values of an organisation to which they have only a fleeting attachment?” the paper’s authors say.

Amazon’s close monitoring is one response; Spotify’s autonomous teams are another. Why would its people in their autonomous teams behave in a trustworthy way? Because, in a world in which they will probably move around, their own reputations, their personal brands, are a vital asset.

When you move on, you want to be remembered as someone who was trusted. The more skilled and mobile you are, the more your employer will believe your reputation matters to you.

Everyone’s reputation matters to them, but not everyone is as mobile or has skills that are rare or transferable. The further down the work ladder you are, the more employers will believe you need to be controlled.

There is a class element to this. The new world of work is horribly divided. Egalitarian corporate culture was just a passing moment.