Is your business ready for robots? 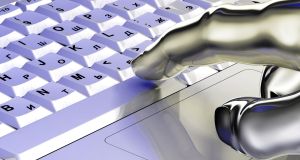 According to research, some organisations are already using intelligent machines to automate more routine, rule-based tasks

The robots are coming, or so media have proclaimed in recent months. And it is true. The world of work is about to undergo a revolution as advances in technology mean that many jobs humans do now will likely be done by machines instead in a matter of years.

How many roles will go and what sectors will be most affected is open to debate but it seems certain widespread change is upon us.

According to a World Economic Forum (WEF) report published in January, more than seven million jobs are at risk from advances in technology in the world’s largest economies over the next five years.

If anything this is a conservative estimate. The Bank of England’s chief economist Andy Haldane recently warned that as many as 15 million jobs could be lost in Britain alone in the coming years as automation takes hold, while researchers at Oxford University estimate that 47 per cent of total US employment roles are at risk of being eliminated.

In its report, the WEF claimed that advances in technology have left us on the cusp of a fourth industrial revolution.

“Developments in genetics, artificial intelligence, robotics, nanotechnology, 3D printing and biotechnology, to name just a few, are all building on and amplifying one another. This will lay the foundation for a revolution more comprehensive and all-encompassing than anything we have ever seen,” it said.

The report’s authors added that while the impending change holds great promise for humanity, there is also plenty to be concerned about. “As entire industries adjust, most occupations are undergoing a fundamental transformation. While some jobs are threatened by redundancy and others grow rapidly, existing jobs are also going through a change in the skill sets required to do them.”

The forum warned that we must all become better at understanding the changes we face so as to successfully emerge on the other side of this transformative moment.

“The current technological revolution need not become a race between humans and machines, but rather an opportunity for work to truly become a channel through which people recognise their full potential,” it said.

This is all very noble and most of us no doubt share that hope. But whether it happens or not is due in part to how open and prepared employers are to the coming changes. A new study from Accenture suggests that senior executives in both Ireland and other countries have mixed emotions about the impact artificial intelligence is going to have on the workplace.

According to the ‘Managers and Machines: Unite!’ report, some 70 per cent of Irish managers surveyed believe intelligent machines will make them more effective and their work more interesting. But as many as 38 per cent of respondents also fear that cognitive computing will threaten their jobs.

The study includes findings from a study of 14 countries – including 120 middle and front line managers in Ireland – about their attitudes toward and expectations of cognitive computing.

In the report, intelligent machines are defined as computers and applications that collect and analyse data, make informed decisions or recommendations for action, and learn from experience.

According to the research, some organisations are already using intelligent machines to automate some of the more routine, rule-based tasks that take up much of managers’ time. However, for this to become more widespread, work is needed to get senior executives on board.

The key findings of the study indicate that many managers have an incomplete understanding of what they will need to thrive in a partnership with intelligent machines, and that there is a trust gap emerging, with few executives keen to take advice from non-humans.

The report suggests that while managers across the globe are excited about the idea of being set freed from time-consuming tasks by intelligent machines, many are also uncertain about whether they have the right skillsets to deal with managing the changes that cognitive computing will bring.

“In general managers feel quite positive about the possibilities that are there, but the study also shows that many are concerned about their jobs being replaced and of whether they are equipped for a future in which machines take over some tasks from them,” study co-author Ryan Shanks told The Irish Times.

“In addition, with intelligent machines also freeing up frontline staff from mundane tasks, executives will have to learn to manage employees differently. Take a call centre for example, typically, workers are just meant to read and follow instructions from a script and so the level of people development is not high.

“But if you end up in a situation where machines do much of that basic stuff then employees will be able to focus more on areas such as better customer service. But for that to happen, managers will need to have coaching skills that they might not have needed previously,” he added.

Mr Shanks, head of talent and organisation at Accenture Ireland, said that before organisations consider introducing more intelligent machines into the workplace, they will need to overcome serious resistance from senior executives.

The lack of trust that managers have in intelligent systems needs to be addressed, according to the research, as managers, particularly in Ireland, are very reluctant to blindly follow recommendations dispensed by machines.

When asked if they would trust the advice of intelligent systems in making business decisions in the future, only 8 per cent of Irish managers said they strongly agreed, while almost half of those surveyed were distrustful of allowing machines to make judgments on business tasks, such as deciding how to invest or who to hire.

Despite the fact that 43 per cent of those surveyed said they currently worked with intelligent machines, almost one in ten Irish executives believe nothing would allow them to trust the advice of a machine.

To get on board with fully trusting an intelligent system, managers said they needed to understand how the system works and generates advice, and to see that it had a proven track record and could give a convincing explanation for its recommendations.

Managers generally expect intelligent machines to work in areas such as analysing and sharing information, performance monitoring and reporting, and planning and co-ordinating work.

They envisage that this will lead to senior staff needing better digital and analysis skills but Mr Shanks stresses that improved interpersonal skills will be more essential.

“In the old world, collaboration is something that sounds like it could be a waste of time but in the future world it will be much more essential. A shift is going to take place away from managing a workforce in quite a robotic manner to doing so in a more empathic manner.

“Given this, the manager of the future will need to have greater listening skills and good problem-solving abilities, and be more creative. Essentially, the arrival of intelligent machines means that, ironically, managers will need to be more human than ever,” said Mr Shanks.

The research also shows managers need to rethink the future as currently only a quarter believe people development will be a key skill in the years ahead and only one in 10 think collaboration is going to be important. “On the one hand there will inevitably be job losses in the future as intelligent machines become more commonplace, but at the same time there is a possibility of new, more interesting roles being created. So it isn’t clear cut to say that machines are coming only to get rid of people. Equally, their arrival means that there are opportunities for people to escape humdrum tasks and get more pleasure from their jobs,” he said.