Windfarm staff to strike as part of pay dispute 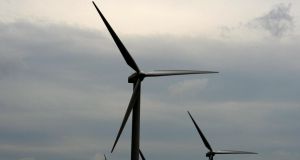 Union members at one of the State’s largest windfarm service providers are to go on strike as part of a row over pay increases and cuts to allowances. File photograph: David Sleator/The Irish Times

Staff at one of the country’s largest windfarm service providers are to go on strike on Friday as part of a row over pay increases and cuts to allowances.

The stoppage, which initially will be for 72 hours, involves members of the Technical Engineering and Electrical Union (TEEU) working at Enercon Windfarm Services Ireland Ltd.

The union said the 72-hour strike could be extended if the company refused to engage with it to discuss pay increases and the restoration of cuts to allowances which were put in place in January.

Enercon is a German-owned company and one of Europe’s largest suppliers of on-shore wind energy turbines. It has installed a quarter of all Irish turbines on windfarms across the country. Customers include the ESB, Ervia and some of Ireland’s largest pharmaceutical companies.

It is understood that on Friday the union, which said it had about 100 members in the company, will place pickets at the company’s headquarters in Tralee. However, the union has warned that the dispute could spread further.

The TEEU’s southern regional secretary Pat Guilfoyle said that the union had been seeking a meeting with the company since last September.

Mr Guilfoyle said that when the company failed to respond positively, the TEEU had proposed that both parties use the conciliation services of the State.

“The company responded by saying it was not willing to engage with any third party on matters concerning employees.”

“We became even more concerned when the company sent a communication to all of its employees in Windfarm Services Ireland Ltd in late November stating that it intended cutting allowances from January 1st, in defiance of the enhanced code of practice on voluntary dispute resolution.”

Enercon Windfarm Services Ireland Ltd said it had started in 2005 in the Republic with a single employee for the State’s service needs. It said since then the company had grown steadily, increasing employee numbers irrespective of the financial turmoil of the time.

“Enercon created service and installation jobs within the country, providing employment and training to people with construction-related trades, including fitters, mechanics and electricians, as well as creating additional jobs abroad for our Irish teams.

“Today’s number of over 180 employees working throughout rural Ireland has been possible due to a culture of direct communication within the company on all levels. This is, and has been, a key reason for our success with the team we have established in Ireland.”

The company said it was “focused on continuing this success for the employees as well as for the company without having to complicate matters with third party involvement”.

The company said: “The focus of the past, as well for the future, is to engage directly with our employees to continue the success story of green jobs in Ireland.

“Over 180 jobs are not the end, we aim for another 50 positions to be added going forward. Losing the focus on our core strength and our customer service would endanger not only the quality jobs in rural areas across the country, but also the jobs created for the Irish service and installation teams working abroad.”

The TEEU said as the company refused to engage with it or with the Labour Relations Commission, it had been left with no alternative but to undertake industrial action. The union said it remained available for talks.

Useful software free of charge that can make the difference 04:45
Retailers ‘asked to work almost like hospitals’ during reopening phase 02:23
Mid-west tackling coronavirus employment challenges with upskilling initiative 02:15
Ryanair to process all Covid-19 refunds within 10 weeks, Michael O’Leary says 23:17
Ibec warning, Jurys plans and what to do with Facebook and Twitter? 22:40

1 Angela Merkel sweeps in to save the euro zone
2 In six months we will be in the grip of a 1980s-style recession
3 Stocktake: Has Warren Buffett lost the magic touch?
4 Brother is dragging his heels as executor of uncle’s will - is there anything I can do?
5 Chartered Land moves closer to approval for Dublin’s tallest tower
6 Retailers ‘asked to work almost like hospitals’ during reopening phase
7 US court allows shareholders to sue Ryanair over claims during dispute
8 Ryanair to process all Covid-19 refunds within 10 weeks, Michael O’Leary says
9 Should my mam wait for house prices to drop before buying?
10 Irish whiskey sales near milestone of 12m cases a year
Real news has value SUBSCRIBE