A smartphone app that helps cope with negative thoughts has had 55,000 downloads 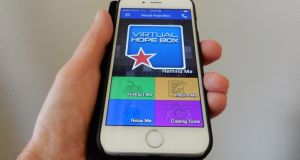 Virtual Hope Box: helps people understand and learn their negative behavioural habits in an effort to reverse them

One of the core aspects to treating depression is to find ways of reminding sufferers of their reasons for hope.

Eoin Stephens, the president of PCI College, a training centre for therapists, says the goal of cognitive behavioural therapy (CBT) is essentially to change the client’s way of thinking, to help them “understand and learn their [negative] behavioural habits and reverse them”.

The “hope box” is a tool that helps bring that change about.

In standard practice the hope box is a physical container with various items that provide distressed patients, particularly those who are potentially contemplating suicide, with reminders of their reasons for living. These can vary from photographs of loved ones to mementos of past achievements. The problem, as psychologist Nigel Bush from the National Center for Telehealth and Technology in the US puts it, is that “it’s a box of stuff that is very unwieldy and is often not available when needed most. The times at which people need their box are unpredictable and they often won’t have it with them.”

Dr Bush leads a team of researchers who have tried to deal with that issue and provide a more practical, modern alternative.

He and his team, working for the US department of defence, have developed a free app called the Virtual Hope Box. He says they “took a bunch of elements from standard cognitive therapy and put them in a smartphone app”.

The VHB contains simple tools to help people with coping, relaxation, distraction and positive thinking. Dr Bush says its “remind me” function builds on the traditional hope box idea and is completely customisable to each patient’s preferences. There are puzzles and games in the app which can be useful to “take people’s mind off negative thoughts if they just won’t go away”.

It also incorporates coping cards, which Dr Bush says traditionally would be flash cards that patients would “carry around with them in their top pocket” and refer to when experiencing distressing feelings.

Stephens finds coping cards to be particularly useful for issues such as addiction. Where a patient might feel they cannot go through a day without serving their addiction, a coping card could “challenge that thought by saying something like ‘they can and they have’”, he says.

The VHB provides this and other facilities in a discreet manner, which Dr Bush says is one of the factors that users have been most positive about. He says some people told them they were wary of going to a therapist due to certain lingering stigmas and the app offered them help in a way they were not self-conscious about.

Dr Bush says the response from users has been overwhelmingly positive and some of the participants quoted in a study published in the Journal of Suicide and Life-Threatening Behaviour reflect that. One said the “coping cards reminded me that it is okay to not be perfect”, while another recounted that the app “helped to soothe when thought about cutting”.

The credibility of mental health apps has been questioned lately, with a University of Liverpool study deeming just four of the 14 apps recommended by the NHS effective, emphasising that apps are no replacement for traditional therapy.

Dr Bush also stresses this. “[The VHB] is not intended as a treatment but as an accessory to treatment.”

While the VHB has been shown to be an effective aid for those with suicidal ideation, given its simplicity and variety it also has benefits for those outside a therapeutic environment.

Stephens says that CBT in many ways is “supported self-help” and that issues such as depression are on a continuum where for some people the use of technology could be enough to help them change their outlook. He believes apps are a great source of information and help that was “so hard to get 25 years ago”.

The VHB has been downloaded by about 55,000 people since its launch last year and Dr Bush says he is among them.

“I often use the app myself as a relaxation tool for when I’ve had a crummy day.”