Uniphar sounds out IPO, Fieldfisher expands and our disposable e-culture 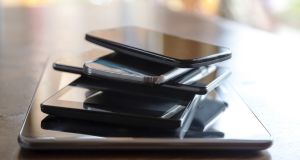 Chris Horn tell us that we are drowning in a sea of discarded mobiles and tablets.

Uniphar, the pharmaceuticals wholesaler and retailer chaired by Maurice Pratt, has begun sounding out potential investors for an initial public offering (IPO) that could raise €150 million and take advantage of a rally so far this year by equity markets globally. Joe Brennan reports.

Fieldfisher, one of Europe’s largest legal firms, is expanding into the Irish market through a merger with Dublin-based McDowell Purcell, reports Eoin Burke-Kennedy.

The company behind Dubliner cheese has increased by €22 million the amount it intends to invest in its facilities as part of an ongoing diversification programme after earnings rose more than 5 per cent, writes Peter Hamilton.

Irish manufacturer Ecocem’s plans for a €45 million cement mill in the US face a public hearing after officials lifted a threat to declare the project abandoned. Barry O’Halloran has the details.

Sales of women’s clothing in Irish shops declined more than 2 per cent in the first three months of the year as the relentless growth of online shopping continues, according to the latest industry data. Mark Paul reports.

The Republic will soon have more homes with smart speakers than without, according to a new forecast. Charlie Taylor has the details.

Chris Horn tells us that we are drowning in a sea of discarded mobiles and tablets.

Fiona Alston has a beginner’s guide to winning investment for your start-up.

Marie Boran on what we have to do to archive the web for future historians.

Ciara O’Brien reviews the Panasonic Lumix LX100 II and finds it one for the enthusiast.

In her weekly column Karlin Lillington outlines why she thinks the shutting down of the internet in the wake of the Sri Lankan attacks was a mistake.

Olive Keogh meets the former car mechanic who is taking on superbugs.

Also in ourInside Business podcast, STATSports head of marketing Ian Forrester on what next for the Newry-based sports tech company after seven-figure investments by Premier League footballers Raheem Sterling and Alex Oxlade-Chamberlain. Cliff Taylor on the implications of pressure from public sector workers for pay increases. Plus: Datalex to suspend shares, Dunnes Stores eyes Base Wood Fired Pizza & EY Entrepreneur of the Year awards.

1 Wet pub openings fuelled rise in Irish Covid infection rates – report
2 Chris Johns: Economies may enjoy ‘roaring twenties’ if ministers learn lessons
3 How long can Government afford to keep State pension age at 66?
4 Basic income for all: Has the Covid crisis given us a new economic model?
5 Only way is up for Stripe as valuation skyrockets
6 Irish designer of Oxford vaccine: ‘I’ve never worked so hard in my life’
7 Direct sea routes to Europe offer certainty in choppy Brexit waters
8 Promontoria barred from pursuing doctor over Ulster Bank loan
9 ‘Make plans but don’t hold on to them too seriously’
10 Oxford-AstraZeneca vaccine may be trialled again to prove results were ‘not a mistake’
Real news has value SUBSCRIBE