Volkswagen-controlled business aims to generate €1.8bn of savings from overhaul 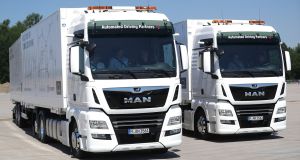 In August, MAN reported a 34 per cent decline in half-year sales and posted a €423 million operating loss, compared with a €248 million profit for the same period in 2019. Photograph: Krisztian Bocsi/Bloomberg

Lossmaking German truck and bus manufacturer MAN plans to cut up to 9,500 jobs across its worldwide business in a move that will add to concerns about the strength of the recovery in Europe’s largest economy.

The cuts are part of an overhaul of the business, designed to achieve a return on sales to 8 per cent by 2023 and generate about €1.8 billion of future cost savings, the Volkswagen-controlled group said on Friday.

The manufacturer counts Volkswagen as its largest shareholder, with a more than 95 per cent stake, according to Refinitiv data.

MAN has been hit hard by the Covid-19 crisis, which led to businesses being shut down and consumers reining in spending, creating less demand for industrial logistics.

In August, MAN reported a 34 per cent decline in half-year sales and posted a €423 million operating loss, compared with a €248 million profit for the same period in 2019.

MAN, which closed its plants in March and April, is one of many large industrial businesses that has said it is impossible to forecast how Covid-19 will affect its trade in the future.

The company said on Friday that the restructuring measures would incur expenses “within a medium to upper three-digit million euro range”.

MAN said it would reorganise its development and production network, with the future of work at its Steyr Motors plant in Austria and two others in Germany “up for discussion”.

The group is overhauling its operations at a time of fragile recovery for Germany’s significant industrial base, which is a powerhouse of the euro zone economy.

Industrial production plunged by a record 18 per cent between March and April and the bounceback – after businesses and factories reopened – was weaker than economists expected. Output rose 1.2 per cent between June and July, data released this week showed, undershooting economists’ forecasts for a 4.8 per cent increase.

MAN shares rose 0.8 per cent to €52. The shares have lost more than 40 per cent of their value since early March.

Up to 9,500 jobs are to be cut in Germany and Austria and worldwide across all areas of the company. – Copyright The Financial Times Limited 2020