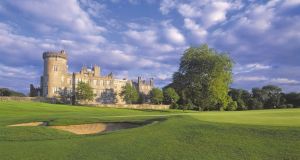 Dromoland Castle hotel: it is unclear whether the other Dromoland shareholders, mostly members of a Wall Street-assembled consortium of wealthy Americans, have pre-emption rights to acquire the shares

The Bahamas bankruptcy trustee for Sir Anthony O’Reilly says AIB has blocked him from selling the businessman’s stake in Dromoland Castle, the Co Clare five-star hotel that is one of the most prestigious in Ireland.

A letter to lawyers in the US written on behalf of the trustee, Alastair Beveridge, also suggests that the Cyprus liquidator of an O’Reilly family vehicle, Indexia, is separately seeking to push through a sale of another stake in the hotel.

The twin efforts in the Bahamas and Cyprus to liquidate Mr O’Reilly’s minority share of Dromoland may yet bring the entire property into play, however.

It is unclear whether the other Dromoland shareholders, mostly members of a Wall Street-assembled consortium of wealthy Americans, have pre-emption rights to acquire the shares.

But as many members of the original consortium have passed away since they bought Dromoland 30 years ago, it is unclear whether the consortium would take up any pre-emption in any event.

Any move to liquidate the O’Reilly stake could, therefore, potentially spark a sale of the entire hotel and a scramble among investors seeking to capitalise on the booming tourism industry.

The letter last month from the Bahamas was filed with a court in the US as part of a case taken against Mr O’Reilly by his former nurse, Sabina Vidunas, in a dispute over payment.

Mr O’Reilly was declared bankrupt in the Bahamas after AIB secured a €22.6 million judgment against him two years ago in Ireland, sparking the financial downfall of the magnate who was once Ireland’s richest man.

The judge in the US case ordered an update of his bankruptcy in the Bahamas every 60 days. The latest, on March 14th, says the trustee has sought legal advice about selling Mr O’Reilly’s Dromoland stake of about 7 per cent, against which AIB has a charge of more than €15 million.

Mr O’Reilly also indirectly owns a stake of a further 3 per cent via a Cayman Islands company.

The rest was bought by US society figures including Walter Curley, a former US diplomat who died in 2016; the estate of Francis Kellogg, who was a member of the Nixon administration; and the Chace family, who controlled Berkshire Hathaway before Warren Buffett.

Mr Beveridge’s lawyers told him AIB would have to sanction any Dromoland sale, while the bank told him he was “unable to sell the shares”.

Meanwhile, the letter says, the Indexia liquidator “has been endeavouring to progress a sale of its shareholding in Dromoland”, presumably a reference to the stake held by the O’Reilly-linked Caymans fund.

Creditors of Indexia, which include the Bahamas trustee, have not agreed to a sale and the process remains “protracted”.

Other Irish-based assets of Mr O’Reilly will soon be sold to satisfy his creditors. The letter reveals his remaining stake in oil explorer Providence Resources has been transferred to the trustee’s name, and will be sold “shortly”.

Tony O’Reilly Jr, his youngest son, is the chief executive of Providence, while another son, former Independent News & Media chief executive Gavin O’Reilly, is a director of Dromoland.

Along with Ashford Castle in Mayo, with which it once shared certain shareholders, Dromoland is among the finest hotels in the State. The property routinely commands room rates in excess of €500 per night and turns over more than €20 million.

The hotel, which has a golf course and sits on 500 acres of rolling parkland, is currently in the midst of a €16 million upgrade to capitalise on its popularity with wealthy US visitors.

Former US president George W Bush stayed at Dromoland when he visited Ireland in 2004 and was infamously photographed in his underwear standing at one of its bedroom windows, sparking a mini diplomatic furore.

Neither AIB nor Mark Nolan, Dromoland’s general manager, would comment. Mr Beveridge and lawyers for Mr O’Reilly and Ms Vidunas did not reply to requests for comment.