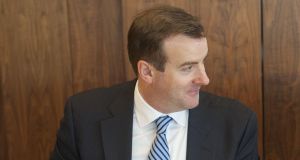 This boosted Mr Mooney’s remuneration for 2016 to €1.3 million, even as he received no bonus or awards under the Dublin- and London-listed company’s long-term incentive programme awards. His basic salary rose to €400,000 in 2016 from €372,500 for the previous year, according to the group’s annual report, published on Monday.

San Francisco-based H&F said at the time of Hostelworld’s initial public offering (IPO) in November 2015 that it intended to pay a discretionary bonus to executives at the company “to reflect their ongoing contributions”. The IPO raised more than €180 million.

Mr Mooney emerged as the key beneficiary of a total of €1.56 million paid to Hotelworld staff, which was set at about 22 per cent of a maximum €7 million outlined at the time of the flotation.

H&F sold its remaining shareholding in Hostelworld in April last year. Shares in the company were hit the following month after it reported weaker-than-expected demand across Europe in the aftermath of terrorist attacks in Paris and Brussels.

Hostelworld reported last month that its revenue had fallen by 4 per cent in 2016 to €80.5 million, its first full year as a publicly-listed company, driven by softer demand in European destinations as a result of the terrorist attacks and Brexit.

Last year “was challenging for the travel industry,” Hostelworld’s chairman, Richard Segal, said in the annual report, which he signed on March 27th. “I am pleased to report that 2017 has started well. Total group bookings are ahead of last year and there is positive momentum across the business.”

He said that the company’s 2016 results, even in the face of last year’s difficult trading conditions, “demonstrate the strength of the overall business model and our ability to execute strongly on our strategy”.

1 Working from home: New costs, new stresses and little relief
2 We are ‘sale agreed’, but can we go back with a lower offer?
3 Restaurants and gastropubs hope to avoid a dry reopening
4 McKillen companies get court order on size of basements
5 Ryanair to challenge Lufthansa’s €9bn aid
6 HSBC board rethinks overhaul and seeks even deeper cuts
7 New pre-booking app for customers a hit with retailers
8 Joint accounts: if one of us dies, can the other access the money?
9 Eason to lay off 150 staff as it prepares for June reopening
10 Hot-desking continues at bank call centres, workers say
Real news has value SUBSCRIBE