Ryanair to create more than 3,500 jobs across Europe 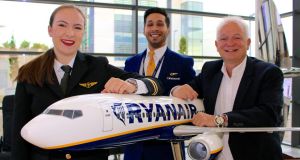 Ryanair has said it is to create more than 3,500 new jobs across Europe next year as part of a major recruitment drive.

The airline said it intends to hire 2,000 cabin crew, 1,000 pilots and 250 aircraft engineers, as well as promoting more than 300 first officers on its command upgrade programme across its 84-base European network.

The company said a number of new positions would also be created in IT, sales and marketing, digital, finance and commercial at Ryanair’s Dublin office, and also at its Travel Labs Poland subsidiary in Wroclaw.

Ryanair, which is due to take delivery of 50 new aircraft in the next 12 months, made the announcement as new figures show the airline’s September traffic grew by 13 per cent to 10.8 million customers.

Rolling annual traffic to September was up 16 per cent to 113.2 million customers.

Load factor – a measure of how full flights are – increased 1 percentage point to 95 per cent last month.

Ryanair recently forecast that average fares would fall between 10 per cent to 12 per cent in the six months to March 2017.