Deadline for acceptance has passed, having already been extended 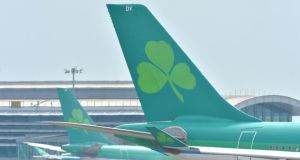 Ryanair said it didn’t expect to receive deal proceeds until September, hence the timing for its acceptance Photograph: Alan Betson / The Irish Times

Ryanair does not intend to formally accept a bid for its 30 per cent stake in Aer Lingus until mid-August, weeks after an offer by British Airways owner IAG expires, a Ryanair spokesman said on Thursday.

Earlier this month, IAG extended the deadline for the offer to midday on Thursday, July 30th, saying it needed 90 per cent of Aer Lingus shareholders to accept.

The Government formally accepted the offer to sell its 25 per cent in mid-July.

“We don’t expect to receive any proceeds from the sale of our stake in Aer Lingus until September and so we plan to formally submit our signed acceptance of the IAG offer in mid-August,” Ryanair said in a statement.

A spokeswoman for IAG said the company would put out a regulatory statement in due course.

1 Elderly parents living in property you own will save you on capital gains tax
2 How safe is it to go back to the office?
3 Owner of Dundrum Town Centre to sell prized assets
4 Regeneron says its antibody cocktail prevents and treats Covid-19 in animals
5 Most workers now expect choice to work from home part-time
6 More than 40% of help-to-buy recipients already had deposit
7 US economy needs more support than thought, warns Fed official
8 House completions down 33% but output has rebounded
9 Eggs in a bottle – liquid gold for free-range producer
10 I tried out deep fake app Doublicat. The results were terrifying
Real news has value SUBSCRIBE