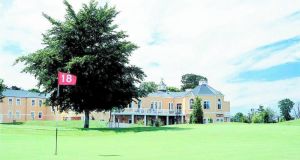 The owners of the troubled Mount Wolseley hotel resort in Carlow are unhappy that their refinancing proposal has been rejected in favour of another investor and will not permit access to its extensive gardens when new owners come in, the High Court has heard.

Donal and Breda Morrissey, who own and live in Mount Wolseley House to which the gardens are attached, are “extremely disappointed” their bid to take the resort operating companies out of examinership has not been accepted and that one from a Brehon Capital has been accepted instead, Bernard Dunleavy, for the examiner, said.

Mount Wolseley House is the “jewel” in the resort’s crown along with the gardens and would not be part of any sell off, the court heard previously.

Mr Morrissey, who is managing director and principal shareholder along with his wife, has written to the examiner saying they would refuse the new owners access to the gardens and to part of the driveway which he believed would jeopardise the hotel’s fire certificate.

Mr Dunleavy said Brehon Capital and the examiner had investigated this and were happy the fire certificate would not be a problem and that, if necessary, alternative arrangements could be made to facilitate the fire service.

Given the Morrisseys’ attitude, Mr Dunleavy sought leave of the court to bring an application later this week to transfer executive powers currently held by the family directors to the examiner so the new investment proposal could go ahead.

Counsel was applying to Mr Justice Peter Kelly for permission to extend the examinership process until next week to allow the Brehon Capital investment to proceed.

There had been some “slippage” in the process because the Brehon proposal came relatively late in the day but the examiner felt he had no choice but to afford them the opportunity to bid, counsel said.

As Brehon had recently invested in the Mount Juliet Hotel in Kilkenny, it was felt there would be a “certain synergy” between these two businesses making its investment proposal very attractive.

Bank of Ireland, owed €28 million, had initially wanted the resort put into receivership but was now underwriting the Brehon investment and not opposing the examinership, the court heard.

Mount Wolseley is a popular wedding venue and comprises a 143-room hotel together with holiday homes, a leisure centre, spa and an 18-hole golf course designed by former Ryder Cup hero Christy O’Connor jnr. It owes €60 million to various banks.

Mr Justice Kelly noted Mr Morrissey’s refusal to allow access to the driveway and service easements at the complex but said he was satisfied this would not deter the investment.

As the complex employs 175 people and the investment proposal is almost complete, he was prepared to extend the examinership process up to the 98th day, on July 10th, the judge said.