Eamonn Rothwell owns 14.8% of ICG stock, which is currently worth more than €150m 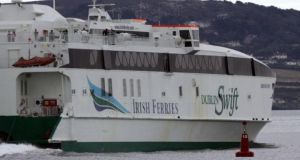 Irish Continental Group chief executive Eamonn Rothwell has made a €4.43 million profit on the exercise of share options in the company and their subsequent sale.

Mr Rothwell bought one million shares at €1.067 under a share option scheme and sold them at €5.50, according to a stock market announcement yesterday.

The announcement showed that the company was informed of the transaction, which relates to just more than 0.5 per cent of the issued shares of ICG, on June 2nd.

It also revealed that Mr Rothwell now owns some 14.8 per cent of ICG stock. He holds 9.933 million shares personally, representing 5.3 per cent of the company stock.

A further 17.747 million shares are held by a company called Rokeby Investments Limited, which is wholly owned and controlled by Mr Rothwell. At current prices his shareholding in the company is worth more than €150 million.

Irish Continental Group, which operates Irish Ferries, recently reported a strong start to the year with group revenue for the first four months up 7.4 per cent to €91.4million and a favourable outlook for the rest of the year.