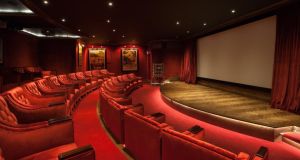 The 32-seat cinema which has been added to Ashford Castle

Almost four years after it was taken from the control of businessman Gerry Barrett and placed into receivership, the renaissance of Ashford Castle in Cong, Co Mayo, is almost complete.

Best-known for its links to John Ford’s hit 1952 film, The Quiet Man, the five-star resort will officially reopen on Friday with Taoiseach and local TD Enda Kenny doing the honours. The castle has been brought back to life by Red Carnation Hotels, a South African group founded by husband-and-wife team Stanley and Beatrice Tollman, who are both in their 80s.

They acquired Ashford for about €20 million in June 2013 and have spent an additional $50 million (€47 million) restoring it to its former glory, while adding some modern touches. They also acquired the neighbouring 50-bedroom Lodge in January 2014 for €1.8 million, a popular venue for weddings.

“It’s probably the most that’s being spent on any hotel project in the country currently,” Niall Rochford, Ashford Castle’s general manager for the past 13 years, told The Irish Times yesterday. “They’ve stripped it to its core and rebuilt it again. The fabric of the building has been secured for two generations. It’s phenomenal.”

The grounds of the 350-acre resort have also been restored, with €500,000 spent on its nine-hole golf course.

In addition, a new retail element has been added through a concept called Mrs T’s Boutique and Bakery.

Room rates have risen to reflect the investment by the Tollmans. Peak season rates now range from €495 for bed and breakfast in a Corrib room, up to €2,500 for the split-level Reagan presidential suite.

If that’s too rich for your blood, off-season will range from €250 up to €1,500. “Anybody coming to experience the castle will see that the rates reflect the investment that has gone into the property,” Mr Rochford said.

Each of the 82 bedrooms has received a makeover and they are “probably . . . the best in the country right now, bar none”. Mr Rochford is targeting an average occupancy rate of 75 per cent, with US visitors comprising 85 per cent of its guests in peak season.

The most recent accounts for Ashford Castle Hotel Ltd show it made a profit of €631,815 on revenue of €6.5 million from May to December 2013.

That was before the refurbishment programme began in earnest.

Will the Tollmans get a return on their investment?

“It’s not a quick purchase, it’s a long-term investment and a labour of love for the Tollman family and Red Carnation hotels,” Mr Rochford said.