Aircraft leasing specialist Avolon to get $1.25bn for expansion 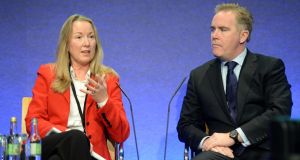 Domhnal Slattery, chief executive of Avolon: did not refer to specific acquisition targets, but he acknowledged that the company would have to buy other lessors if it is to double in size. Photograph: Eric Luke

Aircraft leasing specialist Avolon is set to get $1.25 billion (€1.14bn) in funding from its new parent to kickstart an expansion that could see it buying one of its rivals over the medium term.

Dublin-based Avolon became part of Chinese aerospace giant HNA this month when that group’s leasing subsidiary, Bohai, completed a $2.6 billion (€2.38bn) purchase of the Irish company, which had been listed on the New York Stock Exchange.

It is understood that HNA intends to provide Avolon with $1.25 billion in fresh equity in the coming days to fund further growth at the company, which is destined to become the Chinese group’s core aircraft leasing business.

Avolon owns aircraft worth a total of $22 billion, but wants to double that to $40 billion-plus over the next five to seven years, through a combination of buying competitors and growing its own business.

The Irish company is seen as a potential suitor for US financier CIT’s aircraft leasing division, which has a $10 billion balance sheet. Closer to home, Avolon could also target another Dublin-headquartered lessor, Awas, which has $7.5 billion in assets.

“We will have to pursue mergers and acquisitions if we are to arrive at that, but only if they are accretive and executable,” he said. Mr Slattery took part in a debate with Air Leasing Corporation’s chairman and chief executive, Steve Udvar-Hazy.

Mr Slattery established Avolon in 2010 with the backing of a number of private equity investors. Last November, the company said that it expected to have delivered aircraft worth a total of $1.65 billion to its airline customers in 2015. It also had orders for a further $800 million for this year.

Avolon raised $1.6 billion when it launched on the New York Stock Exchange in December 2014. Chinese player Avic approached it with a $30 a-share offer just eight months later, in August. However, Bohai subsequently trumped this with a $31 a-share bid.

Meanwhile, another speaker at the Airfinance conference, Bjorn Kjos, chief executive of Norwegian Air, which has based a low-cost, long-haul airline in the Republic, suggested that his company would be interested in partnerships with carriers such as Ryanair and Easyjet to extend its European network.

“We will definitely look at co-operating with other low-cost players,” he said. Norwegian has launched flights from the continent to the Middle East, southeast Asia and the US .