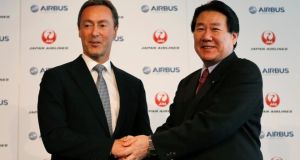 Airbus won its first order from Japan Airlines, securing a commitment for as many as 56 wide-body planes in a market that Boeing has almost monopolized for decades.

The firm commitment has a value of $9.5 billion at list price, while customers typically secure rebates.

Japan Air also has an option to purchase 25 more.

Airbus’s biggest A350 order so far this year gives the European manufacturer a break into Japan, where the fleets of ANA Holdings and Japan Air, the country’s two biggest carriers, are dominated by Boeing.

Japan Air choosing Airbus comes after the Boeing 787 Dreamliner was delayed by years and grounded globally early in 2013 after battery malfunctions. “This is the blue-chip order Airbus was hoping for,” said Will Horton, an analyst at CAPA Centre for Aviation in Hong Kong.

“The order certainly opens the door for follow-up orders at Japan Airlines. If ANA orders Boeing, it will have to stress why the Boeing deal was better -- the market will now be sensitive to who you order from.”

The order announced today is the largest yet from a Japanese carrier for Airbus, and entry into service will commence in 2019, according to Airbus.

“Achieving this breakthrough order and entering a traditional competitor market, was one of my personal goals and I am very proud to be leading the team who has accomplished this great success,” Mr Bregier said.

ANA, Japan’s largest airline, said last month it’s pitting the new jets of Toulouse, France-based Airbus and the US planemaker against each other, and will make a decision on an order soon.

Airbus’s A350 had its maiden flight earlier this year and the first variant is set to enter service by in 2014, with the largest model slated for late 2017.

Airbus also offers a smaller variant, the A350-800, which together with the -900 version is targeted at the 787 Dreamliner, while the largest type is a competitor to Boeing’s successful 777 wide-body.

Airbus has been gaining market share in Japan recently as low-cost carriers lease its planes.

1 Ryanair and Aer Lingus monitor impact of conronavirus on travel to Italy
2 Bank leaked my loan request to family who tried to rip me off
3 Mastercard to create 1,200 new jobs by expanding base in Dublin
4 Boris Johnson's new immigration regime will damage much more than industry
5 Billionaire Zara founder and German funds vie for prime Dublin offices
6 A maverick taking on the Irish whiskey establishment
7 How can I view my dead brother’s will if I’m not the executor?
8 Your business week: Election-hit Bank of Ireland to report results
9 Garda mobile contract win causes concern over Eir’s use of Huawei kit
10 Google completes purchase of Treasury Building for €120m
Real news has value SUBSCRIBE