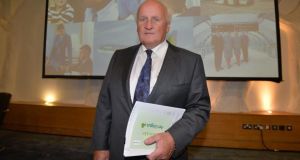 Aer Lingus chairman Colm Barrington’s Fly Leasing recently supplied a Boeing aircraft to Norwegian Air, the Scandinavian operator that is attempting to set up a budget long-haul airline in the Republic.

Mr Barrington is chief executive of Dún Laoghaire-based Fly Leasing, one of a number of Irish companies that finance and supply aircraft to airlines around the world.

The deal with Fly is one of a number agreed by Norwegian Air International with suppliers this year, all of them for Boeing 737-800s, a short- to medium-range craft used by a large number of carriers, including Ryanair.

The Scandinavian airline is leasing the craft. The lessors use the aircraft as security for the rent, which is why the agreement is registered with the CRO.

Most airlines lease some or all of their craft. Leasing companies buy the aircraft using a combination of their own and borrowed cash and rent them to the carriers. Alternatively they buy the craft from the airlines and lease them back.

The Republic is a recognised hub for aircraft leasing, with most of the big players based here.

The Boeing 737-800 has a list price of €70 million but manufacturers generally give buyers discounts, particularly if they are buying large numbers or if they have an existing relationship.

Mr Barrington said this month Fly is on track to spend $750 million (€672 million) on new aircraft this year. His company recently sold a large number of mid-aged craft and is gearing up to replace these. It also completed a sale-and- leaseback deal for a 737-800 with an unnamed airline.

Norwegian Air International plans to establish a low-cost, long-haul business from the Republic that will offer flights between Europe and the United States and Far East for as little as €315 return.

The Irish Aviation Authority and Commission for Aviation last year granted the company the licences it needs to operate an airline from the State. However, its plans have met opposition in the US.

Its parent group’s chief executive, Bjorn Kjos, said last year Norwegian Air Shuttle intended to do much of its financing and leasing from the Republic. At that point, Irish entities owned half its 90 aircraft.

Accounts lodged by Norwegian Air International – the Irish-registered company – show it turned over $100 million in 2014, $49 million coming from supplying craft and crew to operate its parent’s Scandinavia-Bangkok routes, $40 million from ticket sale and the balance came from “other revenues”.

The figures show it lost almost $100 million. Much of this was down to an $88 million write-off stemming from its purchase of the business run by a subsidiary, Norwegian Assets Ltd, which was subsequently liquidated.