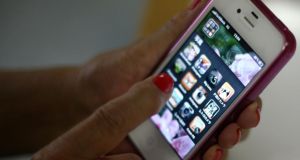 The move by Hutchison Whampoa will give Three a 37.5 per cent share in Ireland’s mobile telecoms market. Photograph: Bloomberg

The price may rise to €850 million, depending on whether or not certain financial targets are met.

Separately, Three Ireland this morning reported a network outage, its first since it entered the market in 2005. According to the company, the outage followed a transmission link failure by a third part provider, Virgin Media. The problem was rectified by lunch-time, with Virgin Media attributing the issue to a software upgrade.

Telefonica-owned O2 is the second player in the mobile market behind Vodafone, and the acquisition will take Three’s market share to 37.5 per cent and bring subscriber numbers to two million active users. The two companies had combined revenues of €803 million in 2012, which compares to Three’s revenue of €174 million in 2012 on a standalone basis.

In a statement, Three Ireland said the deal would provide it “with the scale and financial strength necessary to compete even more aggressively in the market to the benefit of consumers.

“It leaves Three optimally positioned to become the number one player in the Irish market by providing the best value and service to its customers. In addition the combined business plans to invest strongly in creating a state of the art network including 4G/LTE over the next number of year.”

“Hutchison Whampoa is a major global player and this deal is a major vote of confidence in the Irish marke,” he added.

O2’s parent, the Spanish firm Telefonica, is Europe’s most indebted telecommunications company. Its net debt of € 51.3 billion is higher than its market value and a sale of its Irish operations has been a subject of speculation for some time.

Today’s move by Hutchison Whampoa is unlikely to be met with much surprise. Since it moved into the Irish market some eight years ago, there has been much talk of a potential acquisition by the telecoms player, and it even attempted an acquisition of Eircom about a year ago with a € 2 billion cash offer.