The future of education is devices in the classroom 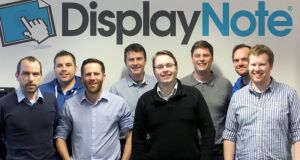 The team of Belfast-based start-up DisplayNote: the company’s app allows the teacher to mirror what’s on their PC to more than 40 devices at the same time

The concept of bring your own device (BYOD) to school, and the interactive opportunities that connected devices in the classroom bring, is transforming education and teaching. At the centre of this overhaul is Northern Ireland start-up DisplayNote.

The idea of laptops and tablets in the classroom can be often a source of concern for teachers. Instead of being engrossed in the lesson, the assumption is pupils will be unable to resist the lure of social networking sites, games and the web.

While students in the past could easily collaborate on projects, how does that work in the digital age?

Furthermore, how can the teacher connect the main classroom display (such as an interactive whiteboard) with students’ devices and vice versa, connecting the iPads and tablets with the board?

Share lessons
DisplayNote has developed highly innovative software to address these challenges. The DisplayNote app allows the teacher to mirror what’s on their PC to more than 40 devices at the same time. They can share lessons or any content from their computers and students can take screenshots, make notes or instantly capture the content of the lesson to their device.

After starting a DisplayNote session on a computer, participants have the option to join the teacher’s session (via a wireless network) using a previously uploaded DisplayNote app on their device (iPad, tablet, Smartphone, laptop). When any content is opened on the main computer, all connected devices will receive and show it instantaneously.

“Where DisplayNote comes into its own is with the ability for the presenter to ask the trainees to collaborate with them in the session. The trainee then switches from taking personal notes, to sharing their input with the rest of the group,” said DisplayNote chief executive Paul Brown.

He says a study with the University of Colorado showed at least 10 per cent of students increased test results using DisplayNote. “We want to help replicate this improvement in learning for our enterprise partners.”

Brown was involved in the ed-tech sector for 15 years before setting up DisplayNote with Andy Bell. “We started the business in January 2012 and had the first product on the market in November of that year. We signed a number of deals early on and thus were exporting before we had a customer in Ireland.”

He says the idea for the DisplayNote app was born out of seeing the impact of the iPad’s introduction in 2010 on hardware and software. The company secured partnerships with a number of hardware manufacturers including NEC in Japan, BenQ in Taiwan and Sahara in the UK.

NEC, for example is bundling DisplayNote with all its interactive projectors so 800,000 to a million units are being distributed globally without the team having to sell directly to the end user.

Besides the office in Belfast, DisplayNote also has a development team placed in Spain, where 10 people are employed. “Finding the right talent locally (in Belfast) has been difficult. It probably won’t go down well with government or Invest NI, but that’s why we have a team in Spain. It has been easier to recruit over there. Technically it has been a challenge to do what we are doing in terms of sharing information across a lot of devices.”

Brown believes educational technology is still a relatively new market, with the potential for huge growth. The annual market size of the tablet market is predicted to overtake that of PCs by 2015. It is predicted that there will be an average of 86 tablets per secondary school in the UK alone by 2015.

“Over the last year we have seen a rapid uptake of tablets in education. A few years ago that would have been unheard of.”

As for the future, he says mobile technology is now driving developments across a range of areas such as education, training and corporate settings.

1 Two men face fraud charges over £1.2bn sale of Nama’s NI loans
2 Covid-19 has distracted us from the looming threat of Brexit
3 Wifi problems? Quick tips to get your home internet out of the slow lane
4 AIB defends ‘incredibly’ high €1.2bn loans charge as 2008 haunts
5 Project Eagle: What was it and why is it in the news?
6 Microsoft now looking to acquire TikTok’s entire global business
7 Sacrificing pubs for schools: Ireland’s latest Covid trade-off
8 Italy threatens Ryanair flight ban for alleged Covid-19 violations
9 Innovation: From camping to child play and stroke rehabilitation
10 How to . . . move (almost) everything to your new phone
Real news has value SUBSCRIBE