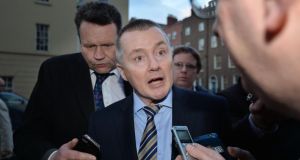 Willie Walsh: IAG chief gave a wide-ranging talk on aviation issues, including IAG’s proposed €1.36 billion offer for Aer Lingus during lunch in the Shelbourne Hotel. Then he got down to the big bucks. Photograph: Alan Betson / The Irish Times

It sounds like IAG chief executive Willie Walsh was in flying form at a lunch in the Shelbourne Hotel in Dublin on Wednesday, hosted by the Leinster branch of Chartered Accountants Ireland. Walsh was the guest speaker.

He gave a wide-ranging talk on aviation issues, including IAG’s proposed €1.36 billion offer for Aer Lingus. Then he got down to the big bucks.

Walsh said that a few weeks ago he happened to be in Paddy’s Bar in Terryglass in Tipperary, a fine little spot owned by Brendan and Mairéad Tierney, a local farmer and a former bank manager. It once featured in RTÉ’s At Your Service business makeover show.

Walsh said there was a draw in the pub in aid of the local GAA club and he duly obliged. A week later, he got a call from the pub to say he’d won. His bounty? A heaven-sent €25.

If his luck holds, he might even land Aer Lingus this side of the next election.

1 Policy failed us during the banking crisis, and it’s failing us again
2 Retailers accused of ‘stealing business’ from rivals by flouting restrictions
3 Aryzta to pursue asset sales as takeover talks fail
4 How long can Government afford to keep State pension age at 66?
5 Guinness brings out a non-alcoholic version of the black stuff
Real news has value SUBSCRIBE