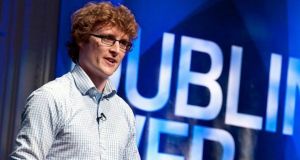 Paddy Cosgrave: changed name of Dublin event back to Web Summit because, according to his spokeswoman, The Summit is hard to find on Google.

The two protaganists in the row between Web Summit and Summit Series have trod strikingly similar paths.

Elliott Bisnow first showed an entrepreneurial bent at college and dropped out to run an online media business. By 2008, aged 22, he was organising annual entrepreneurship conferences, subsequently attracting gilded speakers such as Bill Clinton. Forbes calls his Summit Series a “hipper Davos”.

However, the two now also have their differences.

Summit Series’ lawyers told a court in Nevada when the suit was originally filed that Bisnow had “an epiphany” that led him to create an invitation-only event for young entrepreneurs. In 2008 he took 19 of them skiing to Utah for his inaugural Summit Series event, paid for with his credit card.

The following year, the event attracted a much higher-profile crowd, mainly comprising Silicon Valley hipster-millionaires, and by 2010 his list of speakers included Bill Clinton and CNN founder Ted Turner. He was even asked by US president Obama to organise a forum to discuss ideas to help the US economy.

According to Summit Series, during his stay Cosgrave claimed to have “significant connections” in Europe and proposed to “exploit” these by developing the Summit Series brand on this side of the Atlantic. Discussions led nowhere, and Cosgrave decided to continue with his own event in Dublin. “He understood he could not use Summit or Summit Series marks to do so,” the US company claims.

Later in 2010 Cosgrave held a summit in Dublin. In subsequent years, according to the US company’s court filings, he “systematically, in bad faith, encroached on [Summit Series] trademark rights by changing the name from Dublin Web Summit, to Web Summit, to The Summit.”

In February this year Bisnow’s company says it wrote to Cosgrave threatening legal action but got no response.

In May Cosgrave’s company expanded into the US for the first time, with an event in Las Vegas called Collision Conference. Summit Series estimates it made him $1 million.

According to its court filings, the US company made a written complaint to Cosgrave on May 13th.

It claims that, the following day, the Irish company that was promoting The Summit registered a new name, The Summit Dublin.

In June, Summit Series filed its lawsuit against Cosgrave in Nevada. Its affidavit contains references to scores of US associates of Bisnow who allegedly and mistakenly believed he was behind Collision.

This week, the two sides are locked in settlement talks. Cosgrave has changed the name of the Dublin event back to Web Summit because, according to his spokeswoman, The Summit is hard to find on Google.

1 Michael Smurfit: ‘I asked Trump to invite me to the White House for my 80th birthday’
2 ‘The recovery needs to be a full-scale economic renewal’
3 Small businesses are cannon fodder in zealous anti-virus experiment
4 ‘I’m so lucky to be in the Caribbean – a million miles from Derry Girls’
5 Covid-19 crisis to trigger 20% fall in FDI
Real news has value SUBSCRIBE