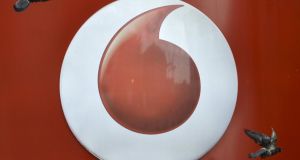 Vodafone has also partnered with ESB for a €450 million fibre to the home joint venture that will roll out high speed broadband to 50 towns across Ireland.. Photograph: Toby Melville/Files/Reuters

Revenues at Vodafone Ireland fell almost 3 per cent as inter-operator revenues fell and competition continued in the pay-as-you-go market.

But the operator, which has around 2 million mobile customers, said contract subscriptions rose by 4.7 per cent year-on-year, and enterprise revenues increased by 4 per cent. as Vodafone signed deals with large companies, including Ryanair.

The number of smartphones on the company’s network continued to rise, with 1.3 million devices now on Vodafone Ireland. That helped fuel a 77 per cent increase in data usage on the network, along with a nationwide investment in 3G, 4G and 4G+ networks throughout the State.

Vodafone has also partnered with ESB for a €450 million fibre to the home joint venture that will roll out high speed broadband to 50 towns across Ireland.

“In a highly competitive market, our performance demonstrates a continued improvement in trends during the year proving the effectiveness of our strategy which is to become the total communications provider of choice in the Irish market,” said Vodafone Ireland chief executive Anne O’Leary. “ As part of that strategy, we have seen growth in our enterprise revenues and continued migration in our customer base from pay-as-you-go to contract subscriptions thus delivering value added services to our customers.”

On a group basis, Vodafone posted a rise in quarterly sales for the first time in nearly three years on Tuesday in the clearest sign yet that Europe’s mobile market is edging towards recovery.

The world’s second largest mobile operator has been hit hard by the constraints on consumer spending in its big European markets, fierce competition in India and by regulator-imposed price cuts around the world.

But on Tuesday it finally forecast 2016 core earnings growth on an organic basis following seven straight years of declines.

That follows updates from the likes of Telefonica and Deutsche Telekom which also showed signs of gradual, if slow, improvement in Europe.

Vodafone, which has 446 million mobile customers in countries ranging from Albania to Ireland, Qatar, India, South Africa and New Zealand, posted fourth quarter organic service revenue, which strips out one off costs such as handsets, up 0.1 per cent following 10 quarters of declines.

That was helped by 6 per cent growth from the Africa, Middle East and Asia Pacific division and an improvement in Europe where it fell by 2.4 percent, compared with the 2.7 per cent fall in the previous quarter.

“We have seen increasing signs of stabilisation in many of our European markets, supported by improvements in our commercial execution and very strong demand for data,” chief executive Vittorio Colao said.

Shares in the group slipped 2 per cent in early trading, pulling back from a 9 per cent rise in just over two months as investors anticipated the better results.

“For some time now, Vodafone has been trying to shake off the shackles of being regarded as a company which is “ex growth” and today’s annual reflection points toward some future promise,” said Hargreaves Lansdown Stockbrokers.

Analysts believe the European mobile market is set to stabilise in 2015 and 2016 and should return to top-line growth after that, helped by demand for the more expensive fixed-line fibre services and superfast 4G mobile connections.

They believe Vodafone should be well placed to reap the rewards after it embarked on a programme called Project Spring which was designed to bolster its mobile speeds and either build or buy superfast fixed-line broadband networks.

“We have significant opportunities ahead of us, with only 13 percent of our European mobile customers using 4G, and our market share in fixed services only a fraction of our share in mobile,” it said.

The one weak spot in the results was Germany, where it was hit by stiff competition. The group said the CEO of Vodafone Germany, Jens Schulte-Bockum, would stand down during the 2015-16 financial year.

One other longer-term concern for Vodafone investors has been the thought that it could seek to upgrade its networks in one go by buying Europe’s biggest cable operator Liberty Global .

Analysts at Jefferies said they would like to hear the company predict strengthening revenue trends through the year.

“We view this as key to reassuring investors on Project Spring delivery and calming fears that Vodafone may need to reinforce itself with Liberty in due course,” they said.

Vodafone forecast a range for 2015-16 core earnings of £11.5 billion to £12 billion, which would indicate core organic earnings growth of between 1 to 5 per cent.

The group said it also intended to grow its dividends per share annually after a 2 percent rise in 2014-15.

Analysts at Citi said the results and guidance were in line with forecasts. “We see the positives as probably not quite positive enough to keep the stock moving up today,” they said.