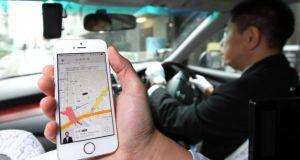 Uber, set up in San Francisco in 2009 as an alternative to taxis and limousines, signs up drivers to the platform if they pass a background check. Photograph: Junko Kimura-Matsumoto/Bloomberg

Uber remains optimistic about rolling out additional services such as peer-to-peer car sharing in Ireland despite continuing to face resistance from some incumbent operators.

The ridesharing platform’s Irish subsidiary reported a slight rise in pre-tax profits and revenues for 2015. Its general manager for Ireland, Kieran Harte, said the company remained committed to this market, although its attempts to introduce its full range of products has met with resistance.

“We have been really pleased with how both riders and drivers have taken to Uber. We have thousands of registered drivers and tens of thousands of riders,” Mr Harte told The Irish Times.

Newly-filed accounts for the company’s Irish unit show it incurred operating costs amounting to €534,413 last year relating to the provision of services to another group company. Revenue earned by Uber Ireland Technologies in the period totalled €579,229, while the company recorded a pretax profit of €44,816.

Uber, set up in San Francisco in 2009 as an alternative to taxis and limousines, signs up drivers to the platform if they pass a background check, allowing them to use their own cars and without being licensed drivers.

While Uber does run some transport services in Ireland using PSV-licensed drivers, including its UberTaxi and UberBlack limo services, it’s currently restricted from running its core offering locally. Irish law requires that anyone carrying passengers for money must have a taxi licence.

The company said last November it planned to launch a ride-sharing service trial locally to highlight its benefits.

Uber has met with Government officials a number of times to try to convince them to change the law to facilitate an extensions of its regular, non-licensed service, so far without success.

“We’re committed to Ireland and believe that Uber can play a valuable role in not only helping people get from A to B, but creating economic opportunities for drivers,” said Mr Harte.

“Uber’s current business isn’t seeing any resistance and is growing well. Uber does have other products it would like to launch, and we’re seeing some resistance from some incumbent operators,” he added.

In July 2015, Uber announced plans to create 300 jobs in Limerick with the opening of a customer service operation as part of a €4 million investment. The company employs about 200 people in Ireland.