Technology has not delivered on human rights, re:publica conference hears 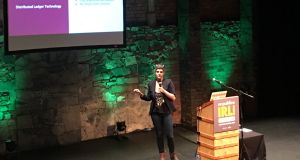 The Re:publica technology event in Dublin started on Thursday morning: The festival, originating in Berlin, has grown from a 700-person meeting of bloggers in its first year to an annual three-day event which drew 8,000 people last May.

Technology has the power to transform how human rights are delivered but it also has the power to discriminate and create a chilling effect on democracy, the re:publica digital culture event in Dublin has heard.

The conference, which has sessions exploring technology and society, politics, privacy, media, business, arts and innovation marks the first time organisers have taken the 10-year-old festival to another country.

Human rights lecturer Daragh Murray of the University of Essex told a session on privacy and data protection in the digital age that technology had not delivered on human rights in terms of its potential positive impacts.

One of the benefits of big data was that it could “reveal the invisible” and show areas of society that were under-represented, to help deliver services and to change policy. This included in areas such as e-health.

Flip side of tech

The flip side was the potential harm that could be caused by technology. Mr Murphy cited the area of predictive policing as an example where the data being used to provide the basis for decision-making about people was flawed.

In the US, he noted, algorithms were being used for sentencing and parole decisions and for predicting where outbreaks of crime were likely to occur.

Technology now also meant that surveillance of individuals required significantly fewer resources, Mr Murphy said. This could have a “chilling effect” on democracy because people would refrain from seeking out particular types of content because of the possible repercussions for them.

Dr Dennis Jennings, told the panel he believed the public were easily distracted by the “baubles” of advertising and short-term reward.

Dr Jennings, a former director of UCD Computing Services, is currently managing director of consulting firm Knous Ltd, said he believed citizens needed to start writing the rules on privacy from an ethical perspective rather than taking them from the perspective of corporations and governments.

The new General Data Protection Regulation, due to come into force in the EU in 2018, was a “huge step forward”, Dr Jennings said, because it showed the idea was gaining ground that privacy was a natural human right.

“If that can gain traction, it will change the world,” he said.

The panel was moderated by The Irish Times journalist Karlin Lillington.

Events later today will include a discussion on the implications of augmented reality, used in games such as Pokemon Go, and on privacy in a world surrounded by cameras and CCTV.

The Berlin festival has grown from a 700-person meeting of bloggers in its first year to an annual three-day event which drew 8,000 people last May, and included 770 international speakers from 60 countries.