Taoiseach to join Irish entrepreneurs and musicians at SXSW in Austin 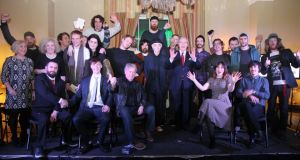 US ambassador to Ireland Kevin O’Malley announcing details of Ireland’s involvement in the SXSWi festival, which start on March 13th in Austin, Texas

The Taoiseach, Enda Kenny, will be speaking at this year’s South by Southwest Interactive (SXSWi) festival in Texas, along with Irish entrepreneurs Brendan O’Driscoll and Joe Mitchell.

The Taoiseach is expected to speak at a session in the Start-up Village on Sunday March 15th on how the Irish economy has been growing rapidly and how the State is earning a reputation as a successful location for launching start ups and a leading tech and innovatin hub.

The interactive festival,which showcases cutting-edge technologies and digital creativity, will run from March 13th-17th in Austin, Texas. Self-driving cars, revolutionary ride-sharing programmes, robots, drones and medtech will be among the topics being explored.

Speaking at a send-off event for the Irish bands and start-ups, which took place at the American Ambassador’s residence this week, Chris Hyams, senior vice-president for product at job site Indeed, said entrepreneurs and musicians can have a “very successful SXSWi” without getting a record deal, a million users or a million dollars.

He said the trick to making the conference and festival a worthwhile and successful trip, is to make connections, skip parties and talk to people after panel sessions.

Cameron and Tyler Winklevoss, the brothers most widely known for their legal battles with Facebook founder Mark Zuckerberg, are among the featured speakers and will discuss what bitcoin needs to succeed.

The famous twins claimed Mark Zuckerberg stole their idea for a social-networking website to start Facebook, but settled the case several years ago. They have since created the Winklevoss Bitcoin Trust, a NASDAQ-listed exchange-traded fund, as well as the Bitcoin price index WinkDex to price their ETF.

This year’s film festival will screen a total of 150 features, including 102 world premieres. Ryan Gosling will discuss his new film, Lost River, with Guillermo del Toro. Two-time Oscar winner Field is scheduled to discuss her career. The premiere of director Paul Feig’s upcoming Melissa McCarthy action-comedy, Spy, are among the blockbuster titles set to bow at this year’s South by Southwest Film Conference and Festival

SXSWi is where Twitter and Foursquare first appeared on many radars and confirmed the event’s link with new innovations. Together with SXSW Film, SWSX Interactive attracts 51,000 attendees to Austin every March. The music event has grown from 700 registrants in 1987 to almost 28,000 conference participants.

James Vincent McMorrow, Le Galaxie, and Walking on Cars are among the Irish musicians heading to the music festival this year.