Taking your home to work: Chinese workers sleep on the job 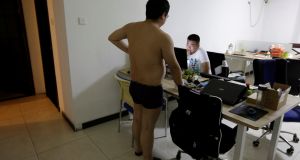 Zhang Huichao, a programmer at N-Wei (Beijing) Technology Company Limited, chats with his colleague Yan Xiaolong before he goes to sleep, in the living room of an apartment which their company rents as office and employees’ dormitory, in Beijing. Photograph: Jason Lee/Reuters 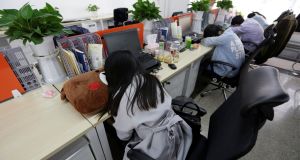 Employees at Goopal Group take a nap in their seats after lunch, in Beijing. Photograph: Jason Lee/REuters 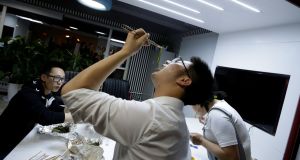 Yu Xiaojian, an employee at Goopal Group, eats with his colleagues during a break at work around midnight. Some companies provide sleeping areas and beds for workers to rest during late nights. Photograph: Jason Lee/Reuters 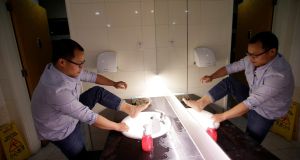 Liu Zhanyu, a client manager at DouMiYouPin, washes his feet at the office’s bathroom before going to sleep after finishing work at midnight. Photograph: Jason Lee 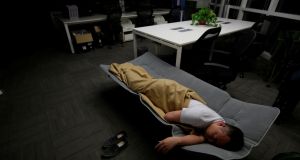 Ma Zhenguo, a system engineer at RenRen Credit Management sleeps on a camp bed at the office after finishing work in the early mornin. Office workers sleeping on the job is a common sight in China. Photograph: Jason Lee 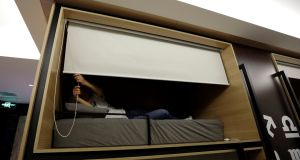 Zhang Shuangjie, an IT engineer at BaishanCloud, drops the curtain as he prepares to sleep around midnight in an individual sleeping quarter in the office. Photograph: Jason Lee/Reuters

Dai Xiang has slept his way to the top. The 40-year-old Beijinger got his start as an engineer, pulling 72-hour shifts at a machinery company while catching naps on the floor.

After a switch to the tech industry and around 15 years of catching naps on desks and other flat surfaces, Dai co-founded his own cloud computing firm, BaishanCloud, last year.

One of his first orders of business – installing 12 bunk beds in a secluded corner of the office.

“For technology, it’s more of a brain activity. Workers need time to find inspiration,” Dai said. “Our rest area isn’t just for sleeping at night, the midday is also OK.”

Office workers sleeping on the job has long been a common sight in China, where inefficiency and a surplus of cheap labour can give workers plenty of downtime in many industries.

But China’s technology sector is different. Business is booming faster than many start-up firms can hire new staff, forcing workers to burn the midnight oil to meet deadlines.

“The pace of Chinese internet company growth is extremely fast. I’ve been to the US and the competitive environment there isn’t as intense as in China,” said Cui Meng, general manager and co-founder of start-up data company Goopal.

The company’s programmers, in particular, work overtime every day, he said. To get them through, they are allowed to sleep around lunchtime and after 9 pm, either facedown at their desk or by commandeering the sofa or a beanbag chair.

Living at the office

At its most extreme, some tech company employees even live at the office during the work week.

Liu Zhanyu at DouMiYouPin, a recruitment and human resources platform, bunks down in a converted conference room Monday-to-Friday to avoid the daily commute of more than an hour to his home in Beijing’s far eastern suburbs.

The head of the “large clients” department usually retires to the room shared with one or two others between midnight and 3am.

“We have to get up at 8:30am because all our co-workers come to work at 9:30 and we wash in the same bathroom everyone uses,” said Liu.

While workers across companies said the potential pay-off of working at a start-up was worth the long hours, they aren’t without a social cost.

“My kid misses me, I get home and he lunges at me like a small wolf,” Liu said, speaking about his three-year-old son who he only sees on weekends. “That makes me feel a bit guilty.”

Programmer Xiang Shiyang, 28, works until 3 or 4am at least twice a week at Renren Credit Management, which uses big data to help firms manage financial risk, leaving little room to socialise outside of work.

“I don’t have that many opportunities or much time to find a girlfriend,” he said.

The company provides cots for workers like Xiang to sleep on during late nights.

“Actually working overtime is a very casual thing,” he said. “Because I’ve invested the whole of my being into this company.”