Nokia hopes its plans will ring true for future

Firm’s demise has been predicted many times, but it is not planning to go quietly 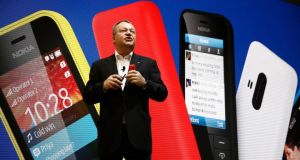 No matter what way you look at it, the last few years have been tough for Nokia. Once the king of the smartphones, the company has seen its status decline as Apple and Google fought for supremacy in the market.

It has seen market share fall from a peak of 40 per cent in 2008; these days, it doesn’t even make the top five smartphone vendors, with Samsung, Apple and Huawei leading the pack.

The death of Nokia has been predicted many times, but it seems that the company is not planning to go quietly. It has plans for the market, thanks to its partnership with Microsoft and its recent takeover, and it is optimistic that those plans will pay off.

Nokia is no stranger to innovation and change. The company started out as a wood pulp mill in 1865, when it manufactured paper, before moving into rubber and tyres. It wasn’t until after the second World War that it began to move into electronics, and, in 1967, the Nokia Group was born.

Back then, electronics formed 3 per cent of Nokia’s revenues. By the 1990s, the company had established itself as a smartphone expert, a position it continued to enjoy for several years.

In a way, Nokia was ahead of its time. It turned the mobile phone into a fashion accessory, introducing the concept of colour and customisation to its range.

Nokia wasn’t afraid to take risks. It was dabbling in wearable technology long before the current crop of fitness trackers and smartwatches came to the market, experimenting with pendants that showed digital images and other such devices. And it didn’t seem afraid to turn the concept of what a mobile phone should look like on its head, with handsets featuring a circular keypad and the Ngage mobile gaming device.

But when the iPhone launched in 2007, things took a turn for the worse. While everyone was embracing touch screens, Nokia failed to tap into the trend effectively, leaving it struggling to catch up. Its market share has steadily fallen since the iPhone took hold in 2008, and there are some who wonder if the company will ever find its way back.

A change of leadership – Stephen Elop was appointed the company’s first non-Finnish head in 2010 – and a few challenging years later, Nokia is a changed company. Cuts in the workforce and effectively relinquishing control of its main software platform have seen a changed Nokia emerge.

The biggest change was the sale of the mobile devices division to Microsoft, which will see the tech giant use the Nokia name under licence before phasing it out. Announced in September last year, the deal was closed in May, marking the end of an era for the Finnish company.

“We’re living under the umbrella of Microsoft,” says Conor Pierce, vice-president of Nokia UK and Ireland. “It’s been a long time coming, so we were well used to the idea. Does it feel different? No it’s business as usual for the moment.”

However, one thing that has changed, he says, is confidence.

“For the past few years, we’ve been heavily pushing a device portfolio – mobile phones, tablets – and now we can go in confident that we have much more ammunition, if you like.”

That ammunition is the portfolio of services offered by Microsoft, from Office 365 on mobile devices to online storage such as OneDrive.

“It’s more of a rounded story than purely devices,” he says. “Now we’re part of the same team, it’s like sewing a mobile thread into all of those assets and bringing them into the mobile device, and bringing them to life on the device.”

The two companies are working much more closely too, which Pierce believes will benefit both brands, and Windows Phone, while no threat to Android or iOS just yet, is showing some growth. According to figures from IDC, Windows Phone grew 8.7 per cent in the first quarter of 2014, with its 7.6 million shipments driven almost entirely by Nokia.

But it’s still playing a poor third to Apple and Google, with only 2.7 per cent of the market worldwide.

“By dropping its licensing fees the platform becomes much more appealing, in addition to the features that come along with 8.1,” IDC said in the report. “Now that the Nokia acquisition is complete all eyes will be on execution and what comes next.”

There have been some wins for Windows Phone too in the business-to-business sector, and the general feeling is that the Nokia acquisition will help strengthen that focus for Microsoft.

That doesn’t mean it will be abandoning consumer products. Nokia’s pitch has been the extras it brings, from the high- resolution camera built into the Nokia Lumia 1020 – 40 megapixel – to the mapping and location software.

Pierce says that will still remain a part of Nokia’s mobile strategy, but the link with Microsoft will open up new opportunities.

The consumer sector has been the primary driver of growth for Nokia in the past few years. “We’ve freshened up the smartphone market,” he says.

Bucking the trend for the uniform black, white or occasionally silver smartphone, Nokia has brought neon orange, bright pink and yellow into its range, with surprising success.

When Apple unveiled its iPhone 5C last year, it also went down the colourful route, which indicates that Nokia may have been on the right track.

“It can be polarising, but as a challenger it’s very important we stand out and freshen up that market, and that’s what we’re keen to do,” Pierce says.

On the enterprise side, Nokia has big plans too. “I think enterprise affords us the biggest opportunity in the coming years, “ he says.

In the UK, there are wins coming to Windows already. “The tide is definitely turning,” he says. There, recent data from Canlys showed Windows Phone has a market share of 18 per cent in the enterprise market, ahead of Samsung at 17 per cent. However, it is still trailing Apple, which currently has a 35 per share in the region.

Microsoft has ambitious plans though, revealing in a recent interview in Mobile News that it is aiming to lead that market within a year.

Nokia’s latest move, an affordable Android-based handset, has had people scratching their heads. The X series was announced at Mobile World Congress in Barcelona, only a matter of weeks before the deal with Microsoft was finalised.

It’s intended that the devices will be a stepping stone to Lumia handsets running Windows Phone 8, and it’s not yet clear if Irish customers will get the opportunity to buy the handset from network operators here. Like the X handsets announced in February, there is no Irish launch date as yet.

Nokia is unlikely to ever regain the market dominance it enjoyed in its smartphone heyday, but it’s clear that writing it off as a dead company is just a little premature.