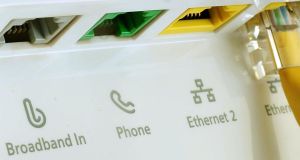 The number of .ie domains registered in the first half of the year rose 6 per cent, the body responsible for overseeing Ireland’s domain name said.

But Ireland is still behind most other European countries when it comes to the number of domains registered per 1,000 people, and poor broadband infrastructure is playing a part in keeping small businesses offline.

This was dominated by corporate bodies and sole traders, which accounted for 72 per cent of all registrations in the six-month period. Just under 80 per cent of the total web addresses registered with the .ie domain registry are business-related.

The majority of the new domains were Dublin-based, accounting for 40 per cent of the the registrations, with Cork in second place at 8 per cent. Galway and Limerick followed with 4 per cent and 3 per cent respectively.

Munster showed a 3 per cent rise in new registrations, with 3,312 added during the six months. That compares with 11,386 in Leinster, which was a 6 per cent fall compared with a year earlier.

In the past six years, the number of .ie domains registered has increased by 47.8 per cent. The Irish domain name has grown in popularity with Irish business owners, with more opting for the addresses over .com, .eu and .org addresses last year.

“The continued overall growth of the .ie domain clearly demonstrates that an increasing number of businesses and individuals recognise the value of an authentic and trustworthy ‘Identifiably Irish’ brand. Last year, we recorded just under 100 .ie domain registrations every day, so it’s very encouraging to see us to surpass that in the first half of 2016,” said IEDR chief executive David Curtin.

The growth puts Ireland 16th out of 20 European countries, with 46 registrations per 1,000 people. The country is ahead of France and Spain but lags Denmark with 232 and Norway with 133, indicating there is still some way to go.

Research from IEDR indicates there is still a section of businesses that see no value in having an online presence. Getting Irish companies online, particularly small and medium-sized enterprises, has been an ongoing fight for IEDR, with various initiatives employed to encourage small firms to set up websites. It is particularly important for companies that could benefit from ecommerce, with recent research indicating Irish businesses were losing out significantly as consumers looked to overseas suppliers instead.

“While our research showed that more and more businesses recognise the importance of an online presence, a small cohort of businesses still remains offline – 55 per cent of this group have no intention of changing this,” Mr Curtin said. “This mentality, coupled with weaknesses in internet infrastructure, may continue to have an adverse impact on future .ie registrations.”

Among the measures being considered by IEDR to allow better access to .ie addresses is allowing the private sale of .ie addresses.

“Ireland is being hamstrung by an inadequate high-speed broadband infrastructure. Continued delays to the National Broadband Plan are keeping many Irish SMEs offline,” he said. “Of the offline SMEs that we surveyed as part of our .ie digital health index, one in four said that a lack of reliable broadband was the primary factor keeping them from engaging in ecommerce. This is not only stunting regional development but holding back the full potential of Ireland’s digital economy.”