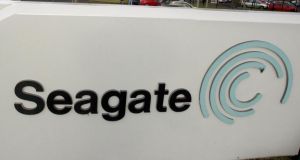 Seagate’s spending put it in 126th place out of the top 2,500 companies in the world in the annual survey by the European Commission. Photograph: Paul Faith/PA Wire

A survey has found that Seagate Technology, an American data storage company, is the single biggest investor in research and development (R&D) in Ireland.

It spent €889 million on R&D in 2013, up 8.2 per cent on the previous year, according to the EU Industrial R&D Investment Scoreboard.

This put it in 126th place out of the top 2,500 companies in the world in the annual survey by the European Commission.

In total there are 17 Ireland-based firms in the top 2,500 R&D investors and Ireland accounts for 0.7 per cent of the €538 billion invested in R&D by the world’s biggest companies in 2013.

Accenture, the international consultants, was the second biggest Irish-based investor spending €518 million, a rise of 27 per cent on the previous year putting it in 188th place.

Volkswagen, Samsung, Microsoft are the top three spenders on R&D in the world spending €11.7 billion, €10.1 billion and €8.2 billion each respectively on R&D.

Bank of Ireland also featured on the list with a spend of €78 million on R&D putting it in 860th place as the bank spent 13 per cent more in this area than the previous year.

In total, the EU scorecard found that 633 of the top 2,500 global investors in R&D were based in Europe. It concluded the world’s top 2,500 R&D investors continued to increase their investment (4.9 per cent) well above the growth of net sales (2.7 per cent). “EU companies in the automobile sector, accounting for one quarter of the total EU’s R&D, continued to increase significantly their R&D (up 6.2 per cent). This reflects the good performance of automobiles companies based in Germany (up 9.7 per cent) that account for three quarters of this sector’s R&D in the EU,” the survey found.

“The poor R&D performance of EU companies in high-tech sectors such as pharmaceuticals (up 0.9 per cent) and technology hardware and equipment ( down 5.4 per cent) weighed down the total R&D increase of the EU sample. The overall amount invested in R&D by EU companies in high-tech sectors represents 40 per cent of the amount invested by their US counterparts and the gap between the two company sample is increasing with time,” the European Commission concluded.

1 How long can Government afford to keep State pension age at 66?
2 Declan Ganley denies Donald Trump trying to swing lucrative 5G contract for Rivada
3 Top gadgets to help make your home safer this winter
4 Marquees and fleets of delivery vans: how supermarkets are ready for Lockdown 2
5 Brexit: UK and EU agree to intensify talks in rush for deal
Real news has value SUBSCRIBE