GAN looks at ‘real money’ gaming with US casino outside US 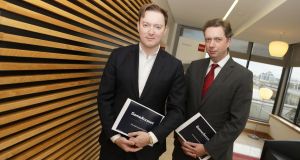 GAN chief executive Dermot Smurfit jnr (left, with chief financial officer Desmond Glass): ‘Everyone who invested in the flotation probably did so with an eye on real-money gaming’.

GameAccountNetwork (GAN), the gambling technology provider run by Dermot Smurfit jnr, is in “advanced talks” with a major US land casino operator to launch a real-money online gambling site in Europe and Asia.

Real-money online gambling is still illegal across most of the US, although GAN works closely with a dozen casinos which it has helped launch simulated gaming products online, often based around casino games such as blackjack.

The big US casino operators have, so far, eschewed the opportunity to enter real-money online gambling abroad, in part to keep onside with US regulators ahead of an expected liberalisation of its online gambling laws in coming years.

However, Mr Smurfit says soon hopes to announce a deal to bring a major US casino into Europe’s online gambling sector, possibly later this year.

He said GAN, which is backed by the Smurfit family and yesterday announced a £1.3 million (€1.5 billion) investment by Dermot Desmond, has held talks with several US land casinos with revenues of more than $1 billion (€883 million).

If a deal is concluded, GAN would supply the technology, the games and the licenses to the US operator, which would then slap its own brand on the service and target only countries where online gambling is legal, but not the US.

“We can provide access to countries where there are regulated markets covering 29 per cent of the world’s population,” said Mr Smurfit. “This is a big strategic move for us. The market hasn’t yet seen a major US land casino enter online in Europe.”

Mr Smurfit was speaking following the announcement that Mr Desmond’s International Investment and Underwriting (IIU) has boosted its holding in the company, buying a further 4.6 per cent.

GAN’s share price has struggled since its 2013 flotation, as an expected liberalisation of US online gambling has proceeded slower than expected. To plug the gap, it has signed simulated online gaming deals with about a dozen casinos.

“We have waited through gritted teeth for regulation to happen faster,” said Mr Smurfit. “Everyone who invested in the flotation probably did so with an eye on real-money gaming. As a backstop, we have simulated gaming, but we are currently a different proposition to the one investors originally considered.”

Mr Smurfit says he hopes that the “re-engagement” of Mr Desmond with GAN – he has been a small investor since 2004, although he sold some of his stake in 2013 – gets the stock more attention.

He met personally with the media-shy billionaire, he says, in recent weeks to try to convince him to invest further in the company.

Analysts said the move by Mr Desmond, who is known for holding stakes long-term in listed companies in the leisure sector, may help allay concerns from some investors over cash burn at GAN.

GAN had £3.8 million (€4.4 million) in cash at the end of last year. Analysts speculated it may turn cashflow positive next year.