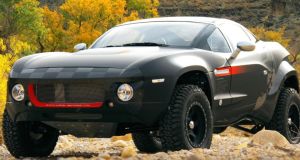 Rally Fighter: Local Motors first car, it was built and funded by a co-creation community of enthusiasts, hobbyists, innovators and professionals.

John “Jay” Rogers jnr leans against a wall in a corridor in the bowels of the Lincoln centre in New York. He has just delivered a speech to a room full of executives, IT gurus and investors at the Exponential Finance conference hosted by Singularity University, a Silicon-valley based proponent of the idea that technology can change the world.

Rogers had marched off stage to ringing applause. From there he plunged straight into an interview with CNBC, the business news TV channel. It’s been a non-stop day for the bearded and lean former US marine who served in Iraq. Rogers is a popular figure at the conference – and in American tech – because he believes that new production techniques will allow the US win back manufacturing from overseas.

In 2007 he founded Local Motors, an open source collaborative motor vehicle maker, to put his ideas to the test. Local Motor’s first car, the Rally Fighter, was built and funded by a co-creation community of enthusiasts, hobbyists, innovators and professionals. The car was deemed good enough to feature on Top Gear, and its logo “Made by you in America” struck a chord.

In more recent times Rogers has hit the headlines with plans to build the world’s first (in good-part) 3D printed car as well as announcing plans to build 100 new micro-factories in the US and overseas to allow innovators build their own motor vehicles.

Currently the Arizona-headquartered company has two up-and-going in the University of Tennessee and Las Vegas.

At the conference Rogers said he hoped to open another in Germany, as part of his businesses push into Europe.

Afterwards, he told The Irish Times, he would also like to open a micro-factory in Ireland.

New ways of doing things – like crowd-funding, co-creating, 3D printing to develop prototypes faster, and so on – he said made it possible for small-scale manufacturing to succeed. “We think there is an opportunity in Europe to have 20 micro factories,” he said.

Rogers said that areas of Spain, Italy and Sicily had long traditions of manufacturing, which had withered to some extent because of low-cost economies. “This craftsmanship can be revived,” he said. “I think in the UK and Ireland there is a history of making vehicles, not even in small way but in a larger way,” he added.

“You had DeLorean (a sports-car once made in Belfast which starred in the Back to the Future movie series). Then you have Rolls [Royce] in Derby. All these great names,” he said. “But there is an itch that is not getting scratched as well as it could be. There is a lot of manufacturing, a lot of design, a lot of capability and a lot of pride which could meet local needs.”

Rogers said he was a fan of Liam Casey, the Cork entrepreneur, who is chief executive of PCH International, a global product developer and supply chain manager. “Look at PCH. It is a global business but based in Ireland. Great ideas and great inventors can be found all over the world,” he said.

“If we stop letting them have the opportunity to make them then we end up hurting ourselves.”

“Lime Labs is trying to figure out how to do hardware product development which I applaud. I think that is really good,” he said.

Local Motors, he said, was working on similar plans to allow great vehicle ideas – from skateboards to sports cars – come to life. Local Motors, he said, had partnered with everyone from the Defense Advanced Research Projects Agency, a United States agency to develop new military technologies, to the giant conglomerate GE in order to share and develop ideas thought up by its tens of thousands of users.

In February Local Motors announced that by September it would build and deliver the first direct digital manufactured vehicle in time for the International Manufacturing Technology Show 2014, a huge trade conference in Chicago, Illinois.

“But you also have to be willing to believe that it may also be just a bad idea so my advice is be sceptical but be optimistic at the same time. If you can balance those two forces then you may be able to craft a great business out of what you are doing.”