Dell insists union with EMC is relationship built to last 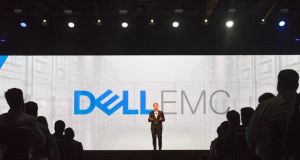 Dell Technologies chief executive Michael Dell: “Please think of us as one company, as that’s what we are now.”

In 2015, Emory University economics professors Andrew Francis and Hugo Mialon published research which found that the more money couples spent on their wedding day, the less likely the marriage would succeed.

Just a few weeks since the biggest tech acquisition in history was finalised, a plethora of new offerings are almost miraculously already available from the newly-named Dell Technologies at an event so grand that it will have be moved from the humble surroundings of chief executive Michael Dell’s home town of Austin, Texas, to Las Vegas next year. That is, of course, if the biggest tech marriage in history lasts 12 months.

Dell Technologies has designed a number of new products to ensure business customers are not “Ubered”, “Airbnbed” or “Teslaed” in their marketplace.

“To ensure that they’re not, today’s organisations must embark on a digital transformation,” said David Goulden, president of Dell EMC’s infrastructure solutions group.

“The first ‘no regrets’ step is to modernise their data centre through the most advanced converged infrastructure, servers, storage, data-protection and cybersecurity technologies, to name a few. This week we are launching a wave of new products and solutions designed as the building blocks for this endeavour.”

Those in attendance at the event had more mixed emotions on the likelihood of the company achieving market share in the number of sectors it’s trying to get into.

“I knew how wide-reaching each individual company’s spread was already,” said one attendee at the conference. “But it’s still pretty amazing to see just how many products and services they are able to offer jointly.”

Others had reservations. “The scale of this merger and the number of markets Dell Technologies is aiming to dominate all seem excessive to me and, therefore, unlikely to be successful,” said a less impressed attendee. “These days the more profitable tech companies are lean and efficient. Dell Technologies will be anything but.”

The two firms have made so many acquisitions of smaller tech players in the last two decades that the list of subsidiaries under the new Dell Technologies moniker is difficult to process (the new company currently employs about 140,000 people worldwide).

Despite announcing plans to merge only 12 months ago, Dell is quick to point out that the two had been courting for years prior. “This is a process that goes back to the early 2000s when Dell and EMC created an alliance,” he said.

There appears to have been a lot of good faith between those at the top of both companies for a long time since. So what might appear like a complex union from the outside makes sense to those inside.

“I’ve known Joe Tucci [former chief executive of EMC] since 1994, way before he went to EMC,” said Dell. “He’s been a great friend and somebody I’ve always trusted and admired.”

The company must now try to allay the fears others have that the union can’t last. At a press conference, Dell pleaded with the media to have faith. “We’re not two companies any more,” he said. “It’s one company. Please think of us as one company, as that’s what we are now.”