Crunching big data as EMC pushes Ireland into the cloud 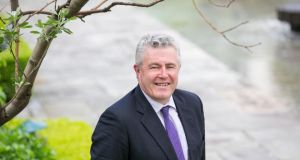 Bob Savage: “The real value I think will be in the big data side of things, in terms of how you can really transform all the the data you have lying around and put it to good use.” Photograph: Naoise Culhane

When it comes to executives in EMC, Ireland’s star performer is Bob Savage. The vice-president and managing director of EMC Ireland’s centre of excellence in Cork has just been appointed to oversee the multinational’s centres in Europe, the Middle East and Africa.

Originally from Glounthaune, Co Cork, Savage started his career with EMC as an electrical engineer. He had qualified at Cork Institute of Technology, and even had a spell as a lecturer before moving to the multinational.

These days, he is heavily involved with the business community, sitting on the board of Enterprise Ireland and the American Chamber of Commerce, and is also chairman of the Cork Institute of Technology’s governing body.

Things have changed considerably at EMC over the years. When Savage first joined the company, it was primarily a manufacturing facility. These days, it is one of the largest EMC manufacturing sites outside the US, but has evolved into one of the company’s centres of excellence, with more than 2,500 workers from 44 different countries employed at the facility.

The centre, which has become a key strategic element for EMC, covers everything from engineering, advanced manufacturing and software development to finance, customer service, sales and marketing, and research and development serving the global market.

The Cork centre is one of eight EMC has worldwide, with others in Egypt, Russia, Israel, India and the US.

“It can be a term that’s bandied about. A centre of excellence is about people first and foremost. It’s about talented, motivated, career-minded individuals who are part of the business units in those centres,” he explains.

Savage’s new role overseeing the centres begins immediately. He will oversee Russia and Egypt, with joint responsibility for managing the centre in Israel.

It was something he had sought as part of his development plan, and a challenge he is looking forward to taking on in the coming months.

He quotes EMC president David Goulden: “EMC is not a technology company; we’re a people company who work with technology.”

That’s an important distinction, Savage says. “It starts and ends with people, their skills and talents,” he explains. “The secret sauce, if you will, is when the people in those business units come together to build a network, share ideas, basically innovate. And that’s the key.”

“From my side, the Ireland centre is a key part of the EU. We have four centres in EMEA; we’re the one who really links strongly to the EU, whether its in research like Horizon 2020, export compliance, labour law, talent acquisition.”

It has been a learning experience for Savage too, with new experiences on both sides from managing a diverse workforce.

“The diversity factor has been incredible, and it’s been an incredible learning for me as a leader as well to work with more than 40 different nationalities and have them as part of the community,” he says.

The majority of these employees would be new hires for EMC, but there are also experienced management-level employees who spend a few years at a time in the Irish operation, bringing with them the benefit of their experience.

That’s a two-way street; at the end of their tenure, they return to their former base with the benefit of the experience they have gleaned from working in the Cork centre.

That complementary learning is set to be a major part of Savage’s role in overseeing the centres of excellence in EMEA.

The closer links between the centres will have a knock-on benefit for the Cork facility, with closer collaboration already taking place.

Each of the centres has its own strengths, and working together will help transfer skills between them. For example, Israel has a reputation for innovation.

“We’re already collaborating on a number of projects that are very important for EMC. There’s complementary learning – great innovation skills from Israel, we have great process skills,” he says.

Major opportunities
“If we go to Russia and our centre in St Petersburg there are links to universities, deep engineering computational skills that again we’re beginning to share and complement with some of ours.

“In Egypt, like ourselves, they are multilingual and there is a very strong base in the Middle East, understanding the customer in that region and sharing that experience with Cork.

“We’re only beginning – there’s a lot of complementary learning between us that’s good for Ireland, but very good for EMC. The role I have is making it all one COE model in the EMEA theatre.”

EMC has been a company in transformation over the past few years, a process that has benefitted its Irish operations.

The company is concentrating more on big data and cloud services, areas where Ireland could potentially play a major role, and less on the manufacturing side of things.

Moving away from pure storage, EMC has been busy over the years acquiring companies and now owns RSA Security and VMware, which have operations in Shannon and Ballincollig respectively.

Savage pinpoints the purchase of VMWare as one of the most important moments in the company’s transformation.

“That wasn’t in our traditional storage paradigm. That was virtualisation of server and resources,” he says. “And to be able to bring that on board and keep it at arm’s length, and learn from that; VMware was the lynchpin, I think.”

The company’s transformation has been somewhat of a success, and is presenting major opportunities for EMC.

“Whereas cloud is transforming IT, big data is transforming business. So the idea of being able to put the proper resources of EMC together in this pivotal organisation, and being able to solve big data problems with customers, and putting all that together in a federation that offers choice . . . Obviously we’d love that everyone would buy EMC’s services, but we offer choice to our customers,” he says.

Customer choice is at the heart of what EMC is trying to do, and progress has been very good, he says.

Delivering technology
A few years ago, cloud services were treated with suspicion by many companies. But now, it has become the norm to use a combination of private and public cloud services, and Savage says firms are more receptive to the technology these days.

“I use the electricity metaphor quite a bit. If EMC was here 150 years ago we would be generating our own electricity, we would be piping it around in custom connections to all parts of the company,” he says.

“If you look at electricity now, it is a utility. You plug your appliance into the wall, you pay and you know exactly what you’re paying for. In that regard, if you take that metaphor forward it’s a new way of designing and delivering IT solutions.

“Where EMC really plays here is it’s a hybrid. You can do it on site in the private cloud, you can do it in the public cloud. The key customer choice here is federating or moving between the two, depending on what the customer solution requires.

“It’s a new way of delivering technology which is still evolving. Its hugely transformational. This transformation with the social and mobile element, there’s a huge consumer emphasis on the transformation as well which hadn’t been there before.”

“One of the obvious angles is cost,” he says. “If you can take cost out of the IT business, it can be invested elsewhere.”

Efficiency is also key. “The real value I think will be in the big data side of things, in terms of how you can really transform all the the data you have lying around and put it to good use.

“Now you add to that the internet of things, sensors that now collect information about your car, your fridge, your clothes, sent back across the internet and is there ready to be analysed.”

The amount of data collected is set to explode in the coming years. But using that data in a timely manner is also an important aspect, and something the company has tried to cultivate.

“We always say ‘big, fast data’ because you need to be able to take the structured an the unstructured data and be able to analyse it, derive business intelligence in real time,” Savage says.

“As one of our executives said, there is no point in saying on a Friday, ‘I’m going to Google that’, and then waiting until Monday for the answer. You need it now.”

Cloud computing is now one of the company’s most significant areas of activity for its Irish operations. Last year, EMC announced it would invest €100 million in its Irish operations, giving it a considerable boost, along with an additional 200 jobs.

In 2012, the world’s first industry-led cloud computing degree and master’s programmes were announced at Cork IT, which EMC played a role in developing and delivering.

The company, along with SAS, also partnered with University College Cork and IMI to create a new master’s in data business, and a diploma in data business that would help deliver the type of graduates and skills needed in the Irish market.

Soon, he expects the role of data scientists to expand as more data analysis is needed.

Savage also sees a role for Ireland in shaping EMC’s strategy going forward. With new challenges on the horizon, he is keen to get started, describing it as an exciting time for both him and the company.

As an added benefit, Savage’s new role will also allow him to spend less time travelling to the US, although it will involve having to visit the centres of excellence on a regular basis. He will be primarily based in Cork though, where he lives with his family in Cobh.

Position: Vice-president and managing director of EMC’s centres
of excellence.

Hobbies: He plays golf, although less often these days.

Something you might expect: As a Liverpool supporter, he is still feeling the after effects of the Crystal Palace draw, and it’s a hotly debated topic among the Cork-based fans.

Something that might surprise: He has an interest in nuclear physics, and almost went down that career path before eventually choosing to be an electrical engineer.