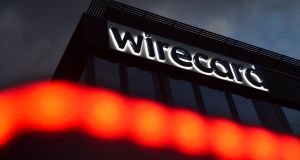 The judge noted a report that current company assets have slumped from a book value of €556.5m to a net realisable value of some €6.7m. File photograph: Getty

An alleged €400 million fraud under investigation by gardaí has left the Irish arm of insolvent payments giant Wirecard unable to pay its debts, the High Court heard on Monday.

The court appointed Ken Fennell and James Anderson of accountants Deloitte as liquidators to Wirecard UK and Ireland Ltd, the Irish-registered subsidiary of the German group.

A report by Mr Fennell and Mr Anderson shows that the Garda National Economic Crime Bureau is investigating whether a Wirecard UK and Ireland escrow account holding up to €405.2 million actually existed.

The account was included in the company’s assets, but the liquidators’ report states that its realisable value is zero. “The existence of these funds is under investigation,” note Mr Fennell and Mr Anderson.

Questions over the account’s existence are the main reason Wirecard UK and Ireland’s cannot pay its debts. The Irish company’s assets stand at €6.7 million while it owes creditors €83 million.

Confirming the liquidators’ appointment, Mr Justice Brian O’Moore said it had to be proved that anyone had committed fraud against the company as that allegation was still under investigation.

Payments group Wirecard’s troubles emerged in June when the company reported that it was unable to find €1.9 billion in cash that its bank accounts were supposed to hold, which its auditor, EY, said was the result of a sophisticated global fraud. Wirecard AG filed for insolvency, owing creditors €4 billion after the hole in its accounts emerged.

The High Court had granted an application on behalf of Wirecard UK and Ireland to appoint Mr Fennell and Mr Anderson as joint provisional liquidators at the end of October.

When the petition returned before the judge on Monday, he said he was satisfied, having heard counsel for the company and the provisional liquidators, to appoint the two men as official liquidators.

The judge said there was “uncontradicted and powerful” evidence the company was unable to pay its debts as they fall due and a special resolution had also been passed by the company in favour of winding up.

Because of the ongoing investigation into alleged fraud, the judge said he would be “reticent” in his remarks.

He noted the liquidators, represented by Brian Conroy, had reported that the current assets of the company have slumped from a book value of €556.5 million to a net realisable value of some €6.7 million. The management accounts also provided for liabilities of €87.6 million with an adjusted liability of some €83.2 million after set off intercompany balances.

The liquidators said they were prioritising the possibility that €43 million of corporation tax is due back to the company in the form of a tax refund.

They said some of the Irish-based company’s 21 employees will be made redundant in the coming weeks. A small number would be retained to assist in the orderly wind down of the company’s operations.

They reported they have engaged with the insolvency administrator in Germany and the principals of other companies in the group regarding operational issues, inter-company trading and the ongoing fraud investigation.

Wirecard UK and Ireland forms part of a group of three companies in Ireland, known as the Irish Wirecard Group,whose sole shareholder is a company ultimately owned by Wirecard AG. Its Dublin office was searched by gardaí last July following a request for assistance from the German authorities.