Japan has a high level of robot production and the machines have been used widely, from factories and space travel to care-giving: just don’t look for emotion 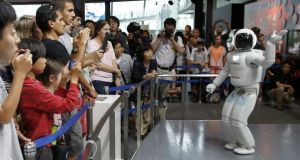 Honda Motor Co’s interactive robot Asimo gestures while talking with visitors at a demonstration event at the Miraikan science museum, in Tokyo

Z -Machines
How many rock drummers have wished for more arms? The drummer in Japanese band Z-Machines has six.

Mach, the group’s guitarist, has 78 fingers. Not that this extra firepower means the group will be bothering the charts soon – the result is an unlistenable exercise in by-the-numbers pop and sledgehammer rock.

Perhaps we shouldn’t be too critical, however: Z-Machines is made up entirely of robots. Heavy metal was never this, well, heavy.

Kirobo
Japan’s love affair with humanoid machines shows no sign of cooling. The country’s space agency has just announced the dispatch of a pint-sized robot astronaut to outer space.

Kirobo, partly built by Toyota, will travel to the International Space Station next month with an unusual mission: to talk to the human crew and reduce their stress. The ultimate aim, however, is loftier: “We’re trying to help build a society where robots and humans can co-exist,” says Fuminori Kataoka, of Toyota, the project’s general manager.

Asimo
Then there is Asimo, often billed as the planet’s most advanced humanoid robot. Last week, Honda’s bubble-headed bi-ped was loaned to Japan’s top science museum – as a guide. Since debuting 13 years ago, Asimo has opened the New York Stock Exchange and played to audiences all over the world.

In 2011, it served tea to Stephen Fry and danced with comedian Jo Brand during an episode of the BBC’s QI. Under carefully choreographed conditions, Asimo can negotiate steps, play soccer, pour itself a drink, respond to about 100 questions and even play the violin.

youtube.com/watch?v=B3gb6p_Y9-c
Asimo 2
Faced with a real job, however, Asimo stumbled – literally. Honda considered sending the robot to help after the 2011 Fukushima nuclear disaster, which left behind deadly radiation.

But engineers decided it was too sensitive for on-site work and could fall over the rubble that was scattered by a series of hydrogen explosions.

Honda went back to the drawing board, creating a robot that could survey the plant’s crippled reactor, using Asimo’s ability to map an environment.

Hal
Honda’s experience raises a key question: how useful are Japan’s robots? The company was initially criticised for failing to lend a robotic hand to the Fukushima clean-up – some called Asimo little more than an expensive toy. After all, if the country’s much-ballyhooed robots can’t help during its worst modern disaster, what use are they?

The criticism in some senses misses the point: robots already do much of the heavy lifting in factories around Japan.

With 360,000 of the world’s million industrial robots, Japan dominates the global market, which will be worth nearly ¥3 trillion (about €23 billion) by the end of this decade, predicts the Japan Robot Association.

Japan’s engineers, however, are finding more uses for robots away from the factory floor, being employed as “service partners” and “welfare” robots.

Hal, a bionic suit developed by Japanese company Cyberdyne, for example, received its global safety certificate in February, clearing the way for a worldwide marketing campaign. The Hybrid Assistive Limb is a mechanical exoskeleton that boosts the strength of the wearer. In promotional videos, Hal-wearing pensioners rise Lazarus-like from wheelchairs for a stroll.

“Outside Japan, robots are often depicted as villains,” says Hal inventor Dr Yoshiyuki Sankai, who was inspired to build it after seeing paralysed people in hospital. “But to us they are friends.”

RIBA-II
Robots like Hal, which is rented out at about €1,400 a month, are already in action at some retirement facilities and care homes in Japan. The Riken research institute is renting mechanical care-givers on a trial basis. The robot lifts elderly patients off a futon and into a wheelchair or bath. The RIBA-II crouches and uses smart rubber sensors to calculate the weight of cliients – up to 80kg – before picking them up.

Assistants
The drive for robot assistants comes partly from Japan’s aging population. The country already has more people in need of nursing care than Ireland’s entire population. Human care-givers are in short supply and Japan has mostly shunned the solution found in other advanced countries: imported foreign labour. Why employ a care-worker when you can get a mechanical alternative, seems to be the common view.

Japan’s government backs this view. The Robot Policy Committee, for example, a body operating under the auspices of the Ministry of Economy, Trade and Industry, promotes the evolution of robots from mainly industrial use to general purpose service robots, capable of such tasks as cleaning, nursing and house-sitting.

The aim is to commercialise these robots and sell them abroad.

SmartPet
Robotics also plays to Japan’s strengths in mechanical engineering and computer science, its love of craftsmanship and a well-honed ability to make incremental improvements to advanced technology.

The country’s “peace constitution”, meanwhile, means that the industry’s energies are geared toward civilian and commercial use, unlike in the US where the military rules.

There is another distinct thread running through Japan’s robot culture – their closeness to humans.

Unlike many fictional robots in Western culture – notably the Terminator – robots in Japanese manga (comics), novels and movies are largely benign.

One of Japan’s most famous fictional robots, Astro Boy, is run on nuclear power, helping to transform its image in the 1950s, a few years after the atomic bombing of Hiroshima and Nagasaki.

Perhaps Japan’s ease with technology explains the effort by its robotics engineers to persist with the development of humanoid robots – machines with faces designed to approximate our own appearance; or to be cute and lovable, such as toymaker Bandai’s string of robot pets.

The latest is the SmartPet, a robot dog with a smiling iPhone for a face and over 100 expressions.


Kuratas
When Japanese robots turn ugly, they’re often modelled on machines from popular culture, such as the Kuratas, a hulking 4,500kg “bot straight from an 1980s” anime (animation) story.

Tellingly, the machine’s designer Kogoro Kurata says he grew tired waiting for reality to catch up with his imagination. “When I was a kid, I thought there were going to be giant robots in the future,” he said.

“But no matter how long I waited, people were only able to make small robots, like Asimo. Eventually, I thought, ‘I can’t wait any more’, and set out to make one myself.”

The fact that millions of Japanese boys (and let’s face it, most of the talent behind Japanese robotics is male) grew up surrounded by similar images means we can expect many more robots in the coming years.

“When we are children, we often read manga stories about friendly robots,” Tomotaka Takahashi, one of developers of the astronaut Kirobo, told the Wall Street Journal.

“We wanted to use outer space as the setting: for other people around the world to see that robots and humans can live together easily.”

Yoichiro Kawaguchi, the designer of Z-Machines, has bigger dreams for his metal band.

“My end goal is to leave the solar system and play on the planet of another solar system,” he says.

He’d better start working harder on Earth first – the band has yet to book another gig since it made its debut in Tokyo in June.

6 Davy board commits to ‘appropriate actions’ after Central Bank fine