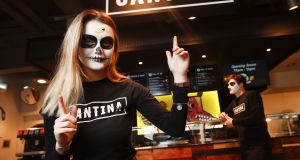 Ireland’s largest fuel retailer Topaz is to create 40 new jobs as part of a €1 million investment that will see it opening up 10 new Cantina food outlets at its forecourts across the country.

Cantina, a Mexican street food chain concept that was introduced by the group last year, currently operates at three Topaz stations in Dublin, with two further outlets opening at the company’s new forecourt at Junction 5 on the M9 in Co Carlow, and in Thomondgate, Limerick, in the coming weeks.

Topaz operates 437 stations across Ireland, 160 of which it owns. The company also operate a large commercial fuels business, with over 30 depots, and two owned terminals across the country.

The group, which was acquired by Canadian retailer Alimentation Couche-Tard in December 2015 for €450 million from businessman Denis O’Brien, has invested €36.1 million in its retail network over the last two years.

In February the group announced the creation of 230 jobs as part of a new €16 million investment with McDonald’s at service stations in Co Carlow and Co Cork.

“Over the past year we have seen a tremendous response to the Cantina menu and we are delighted to continue spreading the full Mexican street food experience across Ireland in 2017,” said senior director of retail operations Joanne D’Arcy.

“Consumer demand in Ireland for a diversified high-quality food offering is ever increasing, and with Cantina Topaz has found that demand is exceeding expectations.”

1 Basic income for all: Has the Covid crisis given us a new economic model?
2 ‘I don’t need to do any of this. . .I don’t actually need to work.’
3 How long can Government afford to keep State pension age at 66?
4 Promontoria barred from pursuing doctor over Ulster Bank loan
5 Online shoppers face unwelcome tax surprise
6 Only way is up for Stripe as valuation skyrockets
7 Brexit stumbling blocks persist as Barnier travels to London
8 We continue to ignore massive pensions elephant in the room
9 Pandemic brings a halt to Zara-owner’s Irish expansion
10 Unilever’s Dutch and British arms merge after 90 years ahead of Brexit
Real news has value SUBSCRIBE