Industry had a ‘robust case’ and could claim compensation in billions 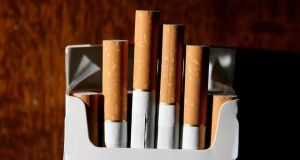 The bill for Ireland could run into the hundreds of millions, according to Exane BNP Paribas. Photograph: Martin Rickett/PA Wire

The international research and equities firm, which is backed by France’s biggest bank BNP Paribas, said it believed the tobacco industry had a “robust case against plain packaging which would allow it to claim compensation” in the billions in Europe.

“The strongest of the legal arguments, in our view, surrounds deprivation’ of intellectual property,” it said.

It said the European Convention on Human Rights and Charter says: “No-one may be deprived of his or her possessions, except in the public interest and under conditions provided for by law, subject to fair compensation being paid in good time for their loss . . . Intellectual property shall be protected.”

Exane BNP Paribas said its understanding of the law was that “member states can take property in the public interest but this must be in exchange for fair compensation.” Trademarks it said were considered to be property.

“Thus if plain packaging meets this criteria the UK or French/Irish government would need to pay fair compensation to the tobacco industry,” Exane BNP Paribas concluded.

It said it expected cigarette makers in Ireland and other European countries working on bringing in plain packaging in an effort to improve public health will argue that “fair compensation would amount to the value of the brands.”

It estimated this value as at £9 billion to £11 billion in Britain but admitted “Of course, as the industry is not likely to see its profits completely disappear such a high compensation figure seems excessive. A figure in the billions however, could well be plausible.”

The Irish cigarette market is about one-ninth the size of the UK, so by this argument the bill for Ireland, if the tobacco companies are successful, could run into the hundreds of millions. The stock market researchers said paying tobacco companies compensation was unlikely to be “politically palatable,” but said there could be ways around this by “introducing a new offsetting tax.”

“At both the World Trade Organisation and especially the EU level, the tobacco industry seems to have a robust case against plain packaging which would allow it to claim compensation,” it said.

It said paying billions to tobacco companies was “not a likely vote-winner” and this could deter other countries from following Ireland and other European states lead.

“The key is whether EU governments wish to press on regardless of this risk, and the degree to which politics enters the judicial decision at both the EU and WTO cases.”