Rise in users and wifi hotspots boosts Bitbuzz revenue by 28% 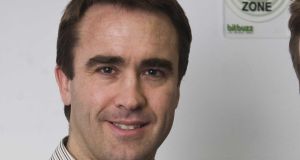 Bittbuzz managing director Shane Deasy: “Our strategy this year is to target the five-star hotel market in the UK”

Irish wireless Internet provider Bitbuzz increased its revenues by 28 per to ¤1.94 million in 2012, according to figures supplied to The Irish Times.

Profit figures are not disclosed by the company but are believed to have increased by a similar percentage rate.

Growth has been driven by the increased use of smartphones and higher demand for data services.

In addition, it introduced Bitbuzz Freedom, which provides free wifi access in a number of outdoor locations in Dublin’s city centre.

It plans to expand this service to Cork and Killarney in April with Tralee, Limerick and Galway slated for connection later this year.

Commenting on the results, Bitbuzz managing director Shane Deasy said: “The start of 2013 was poor as many hotels saw a dip in business in January. We also saw a drop in our daytime venues such as coffee shops and shopping centres as there was a general fall in customer numbers in January.

“Thankfully, February and March were back up. We hope to see similar growth for Bitbuzz in 2013 as last year as the demand for Internet access continues to grow.”

Mr Deasy said its hotel business was “growing rapidly” in the UK. “Our strategy this year is to target the five-star hotel market in the UK, as we believe the experience we have from working with some of the leading five stars in Ireland will help us to win new business.”

Comreg estimates that Bitbuzz accounts for 56 per cent of all public wifi traffic in Ireland.

1 Revenue publishes list of companies tapping State for wage support
2 How long can Government afford to keep State pension age at 66?
3 Bake-off soy sauce tweet backfires for UK trade ministry
4 Grocery shopping app Buymie delivering for Devan Hughes
5 Developers may need to go back to the drawing board as one-beds fall from favour
6 Covid-19 will have a significantly worse impact on UK public finances than on ours
7 Will remote working become the norm?
8 Irish homeowners must see rates relief if they make it through Covid turmoil
9 Trump vs Biden: Stakes are high for the Irish economy
10 Barbie boom, Trump loyalists and a bond king’s latest battle
Real news has value SUBSCRIBE