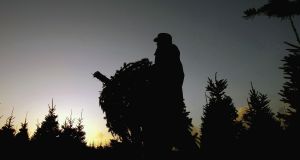 A landowner whose property was used to grow trees for the Christmas market is entitled to a hearing in relation to part of a bank’s claim for judgment over a guarantee on a loan advanced to harvest the trees, the High Court has ruled.

A landowner whose property was used to grow trees for the Christmas market is entitled to a hearing in relation to part of a bank’s claim for judgment over a guarantee on a loan advanced to harvest the trees, the High Court has ruled.

AIB sought judgment for €210,000 against Peter Porter, Fiona Porter and Joseph Michael Redmond, of Ballingate, Carnew, Co Wicklow, over a 2010 guarantee on loan to a company called Porter Tree Care (PTC) which was involved in harvesting trees for the Christmas market. Mr Porter was 99 per cent owner of PTC and Mr Redmond had a one per cent share.

On Tuesday, Mr Justice Michael MacGrath granted judgment in relation to €135,441 of the €210,000 judgment sought which was the limit of a security guarantee on the loan to PTC.

However, he said a dispute over a payment of €74,559 by Mr Porter in relation to the judgment sum was one which might benefit from further and more detailed legal argument and evidence at a hearing.

Earlier, the judge said Mr Redmond, who has long since resigned as director of the firm, had as part of the deal with Mr Porter allowed 46 acres of his land at Ballingate to be used for tree harvesting.

He allowed his land be used as his security guarantee for the loan which he said was to be discharged from the sale of some 200,000 trees planted on the land.

When repayments were not made, a receiver was appointed over Mr Redmond’s land.

Mr Porter was allowed to continue harvesting trees on the land but by 2017 Mr Power blockaded his property.

Mr Porter, supported by the bank and receiver, obtained an injunction preventing him from doing so.

Some €74,559 was paid to the receiver by Mr Porter from the 2017 Christmas tree sales. The receiver disputed the assertion that this money was to go towards discharging Mr Redmond’s guarantee on the loan and said it was the intention of all parties the money should go to the credit of Porter Tree Care.

Mr Redmond argued any liability on foot of the guarantee must be reduced from the sale of the trees. He also claimed the receiver was negligent in not checking how much exactly came from the sales.

Mr Justice MacGrath was not satisfied there are arguable grounds for contending the receiver committed any act of negligence. The receiver’s involvement occurred in the context of Mr. Porter’s application to stop Mr Redmond’s blockade and in relation to an undertaking from Porter to pay him (receiver) the proceeds of the tree sales.

While Mr. Porter did not honour that undertaking, that did not, in the judge’s view, give rise to an arguable basis on which to contend that the receiver was negligent either in respect of his dealings with Mr. Redmond or with Mr. Porter.

There remained the question of whether the payment of €74,559 made to the receiver reduced the liability of Mr Redmond as guarantor.

In the circumstances of this case, the judge was unable to conclude Mr Redmond has not discharged the low burden placed upon him to establish he has an arguable case in relation to that.

So, insofar as the €74,559 received by the receiver from Mr Porter was concerned, he directed that matter should be transferred for plenary hearing. Judgment should be granted in favour of AIB in relation to the remaining sum of €135,441.