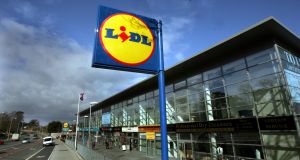 Lidl, which has 143 stores and three distribution centres in the Republic, already pays staff better than most of its rivals.

Lidl has become the first Irish supermarket chain to sign up to the Living Wage Campaign, pledging to pay staff a minimum of €11.50 an hour.

The measure, which comes into force next month, will benefit 20 per cent of its staff who currently earn below this rate.

Lidl, which has 143 stores and three distribution centres in the Republic, already pays staff better than most of its rivals, with entry-level grades starting at €10.50 an hour.

The company said all staff will now earn a minimum of €11.50, rising to €13.00 an hour incrementally within two years.

Announcing the move at Lidl’s Terenure Store in Dublin, Lidl Ireland managing director John Paul Scally said: “We are delighted to be the first major nationwide employer to champion the Living Wage in Ireland.”

“Already 80 per centof our team earn in excess of the living wage, however it is important for us to ensure that those whose hourly pay falls below €11.50 benefit from a substantial increase. This would bring them to a level that is more reflective of enjoying a better standard of living.”

A similar commitment is also being made to employees in Lidl Northern Ireland, using the sterling benchmarked living wage, the company said.

The cost to the company of lifting all its staff to the living wage was not specified but a similar move in Britain, announced last month, cost the company £9 million.

Welcoming Lidl’s commitment to introduce the living wage, Tánaiste and Minister for Social Protection, Joan Burton said: “I congratulate Lidl on its commitment to introduce the Living Wage to all its staff. While I understand that the vast majority of Lidl workers currently earn in excess of the living wage, more than 700 employees will be getting a pay rise as a result of this move.”

“This is also an important statement of support from a large employer to the voluntary Living Wage campaign, which I and my colleague Minister Ged Nash have been driving.”

However, Irish Farmers’ Association (IFA) president Eddie Downey said the move by Lidl to provide a living wage for their staff would “ring hollow” in the minds of farmers and fresh produce suppliers struggling to make any profit as a result of relentless pressure from retailers like Lidl to do more for less.

He said hundreds of small family run vegetable suppliers and producers have been forced out of business over the last number of years by the aggressive pricing policies of retailers.

Mr Downey said everyone was entitled to a living wage, but not at the expense of someone else in the supply chain.

He cautioned that extra business costs of retailers can no longer be at the expense of suppliers and he called on Lidl and other retailers to immediately move to pay all their suppliers a price that ensures primary producers in the food supply chain get a fair reward for their hard work and investment.

The living wage is defined as the minimum pay workers need to meet their needs for housing, utilities, transport, healthcare, clothing and food.

It differs from the legally required minimum wage which is set by law, which campaigners say claim often fails to meet basic standard of living requirements, leaving recipients reliant on welfare for additional income.